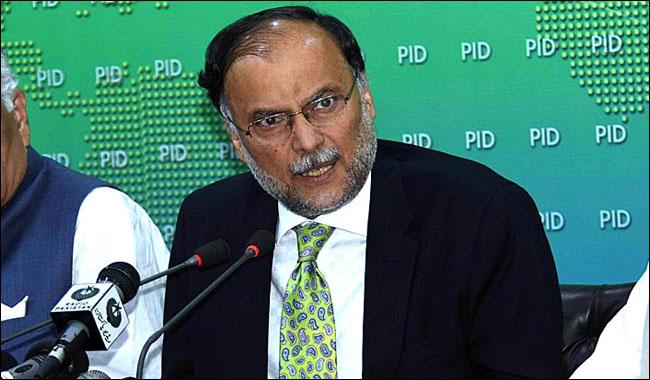 ISLAMABAD: Interior Minister Ahsan Iqbal has stated that Pakistan has wiped out 99 percent hideouts of the militants from its territory and the peace is being restored with fast pace.

The statement of interior minister came hours before US Secretary of State Rex Tillerson’s arrival in Islamabad.

Tillerson during his visit to Afghanistan Monday said, he would be flying to Pakistan on Tuesday to reinforce the Trump administration’s demand that Islamabad move against the Taliban and other extremists allegedly based inside its borders or face the consequences.

Tillerson said, “We have made some very specific requests of Pakistan in order for them to take action to undermine the support the Taliban receives and other terrorist organizations receive.”

Ahsan Iqbal said the problems of Kalashnikov and drug culture were the outcome of the Afghan war.

The minister said situation in Afghanistan was the major cause of instability in the region.

He recalled that in the year 2013, Pakistan was the worst victim of terrorism and not a single day passed without bomb explosions and acts of terror.

But now in 2017, the incidents of terrorism were reduced by almost 90 percent and peace has returned to the country.

He urged the international community to not point fingers at Pakistan and look at the broader historical context in which the whole situation unfolded in the past decades.

Other countries shared responsibility with Pakistan for the situation that emerged during the Afghan war, due to the consequences of the collapse of Soviet Union and destruction of the Berlin Wall, he added.

After the end of war in Afghanistan, the western powers left the region and Pakistan had to bear the burden of 3.5 million Afghan refugees and the poorest of the poor people were left with a lot of weapons which only caused terrorism, he explained.

He urged the international community to help Pakistan in solving the issue of Afghan refugees, adding, "other countries cannot escape this responsibility."

"We have to restore peace, security and create alternative livelihoods."