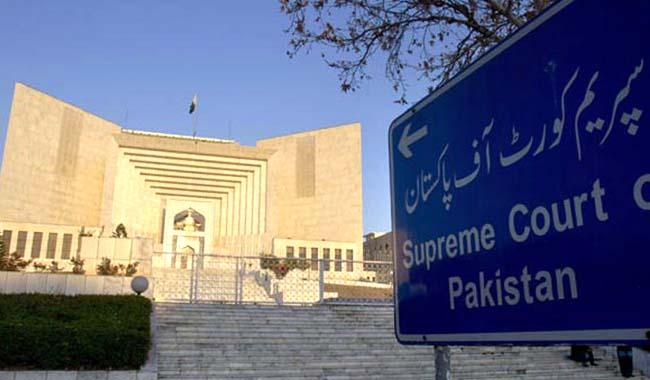 The review petitions were filed by Nawaz Sharif, Hussain Nawaz, Hassan Nawaz, Maryam Nawaz, Captain (retd) Safdar and Ishaq Dar. The court observed that the reasons for rejecting the petitions to be recorded later .

In a long-winded appeal demanding that his case be reviewed, Sharif´s legal team presented 19 points challenging the court´s judgement, saying the ruling suffered "from errors floating on the surface".

Expressing reservations over court’s decision, ruling party leader Talal Chaudhry said  even a terrorist have the right to appeal, but in this case a prime minister has been denied that right and was disqualified from his office.

He said: “our basic appeal was that a lot of things happened for the first time, but free trial and right to appeal was ignored".

“We highlighted  the flaws in justice system. We want grand dialogue because we think how will a common man get justice when a prime minister was deprived of it”.

“These are the things which we brought before the people, and now we want people’s verdict. We will announce our decision after legal and political consultation over the court’s decision,” said the state minister.

Speaking to media outside the Supreme Court of Pakistan building, he said “ Today’s decision is the victory for good governance, now Papa, Phuppo and Pappu will return, and the money too,” .

He said slogan of "Kiun Nikala" is raised from GT road to NA-120, bit in the Supreme Court the ruling party demands removing the judge who would monitor the investigation against Sharifs.

The Supreme Court on Thursday observed that former prime minister Nawaz Sharif received salary from Capital FZE and insisted that there were examples of appointing monitoring judges in the past.

Resuming his arguments, Nawaz Sharif’s counsel Khawaja Harris said that Article 62(1)(f) of the Constitution could not be applied to anyone for merely concealing assets. Cautioning on long-lasting adverse outcomes of life-time disqualification term, the counsel said that the Constitution does not specify such kind of disqualification under Article 62. “My client has been disqualified for life-time on not disclosing his work permit and salary from an offshore company, (however) nullifying general elections could only dismiss him for a single election term (five year term),” he further said.

Justice Ejaz Afzal said that the employment agreement showed that a salary of 10,000 dirhams had been set for Nawaz Sharif. Justice Ijazul Ahsen said the Joint Investigation Team (JIT) documents tell us that Nawaz Sharif had a bank account to receive the salary.

“According to the probe team findings, the first salary was withdrawn on August 1, 2013. The question is, how can the court accept verbally that Nawaz Sharif did not receive the salary?” questioned Justice Afzal, adding that a statement could not be accepted without scrutiny under the law of evidence.

The bench ruled that the documents provided by the JIT looking into the Sharif family’s businesses show that Nawaz Sharif received salary as the chairman of Capital FZE.Justice Ejaz Afzal reminded Khwaja Haris that in an agreement his client had expressed in black and white that he was entitled to get a salary of 10,000 dirhams. “Once you have admitted that that you were entitled to get salary than the intention would not fit in the agreement that was given in black and white, he said.

Khwaja Haris contended that his client had told his son orally that he will not get the salary. Justice Ejaz Afzal observed that oral statement cannot be accepted under the law, adding that there should be a document in black and white under Article 103 of Qanoon-e-Shahadat 1984 that he had no intention to withdraw the salary.

Justice Ijazul Ahsen observed that the documents placed on record during the Panama case show that an account of Capital FZE was opened in the name of Nawaz Sharif with employee No 194,811 who received a salary from the company in August 2013.

Khwaja Haris contended that the salary constituted in the agreement account cannot be declared an asset and that would not constitute disqualification under Article 61(1) (f) of the Constitution. He submitted that every income does not make an asset saying if a person spends some money, it will be no more an asset.

Khwaja Haris said he did not find any precedents wherein the court had invoked Article 62(1)(f) to disqualify a public representative for not disclosing assets, adding that the Constitution does not specify the life-time limit of disqualification under Article 62. Justice Sheikh Azmat Saeed asked the counsel that he should have faith in the court, not the streets, adding that the court will ensure that no injustice occurs during the trial court proceedings. “We will not make the proceedings of the trail court biased,” he observed.

“We have exercised great restrains and there are many things but we desists from saying so, let the trial court decide whether a case is made out or not,” Justice Ejaz Afzal said.

The Supreme Court also observed that the findings of the JIT were not accepted once for all and if the evidences does not fulfil legal requirement, the Sharif family can highlight deficiencies in the trial court and get benefit.

Khwaja Haris said the report filed by the JIT before the apex court in Panama Papers case was incomplete, adding that the documents furnished were forged and not supported by solid evidence. He said that on the incomplete report, the court directed the National Accountability Bureau (NAB) to file references against former premier and his children in the accountability court.

“You are saying to revive the JIT and continue investigation,” Justice Sheikh Azmat Saeed asked the counsel. “No, I am saying that the court had asked the anti-graft body, NAB to file references even on incomplete report,” Khwaja Haris replied.

Justice Khosa said that this is not the first case as earlier several cases were filed in the apex court against Nawaz Sharif and the court had granted relief to him.

“This court even had protected the human rights of General Ziaul Haq,” Justice Khosa remarked, asking the counsel if one decision went against his client, it is not necessary that everything will go against him.

After Khwaja Haris concluded his arguments, Shahid Hamid, counsel for Finance Minister Ishaq Dar, commenced his arguments and contended that his client’s assets did not grow overnight but were expanded in a course of 15 years. In its judgment, delivered on July 28, the court had held that assets of Ishaq Dar grew beyond his known sources of income.

Justice Khosa observed that Ishaq Dar’s assets increased 91 times, as they went from Rs9 million to Rs900 million in short period of time and the counsel should clarify it before the trial court. Shahid Hamid said the NAB in 2016 had cleared his client in the case of having assets beyond known means of income. He said that his client had declared all his assets while the JIT had gone beyond its limits. The court asked the counsel that he should raise this issue before the trial court.

“What goes around comes around,” Justice Azmat remarked. The court adjourned the hearing until today (Friday) wherein Salman Akram Raja, counsel for Nawaz Sharif’s children and son-in-law, will argue before the court.