Pakistan will not permit its territory to be used against any country: Army Chief 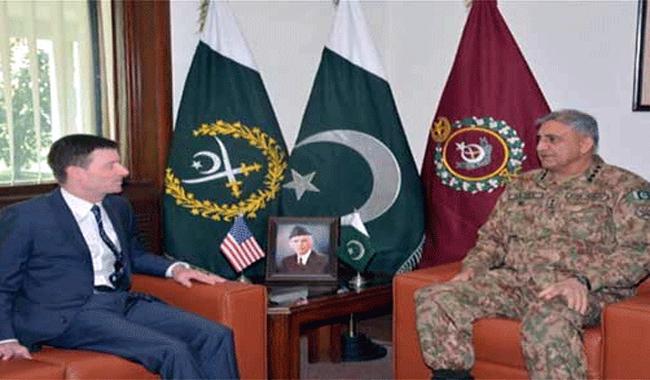 According to US Embassy in Islamabad, General Bajwa said that Pakistan will not permit its territory to be used against any country. Ambassador Hale affirmed Pakistan’s role and great sacrifices in fight against terrorism.

Mr. Hale noted President Donald Trump's call during his speech at the Arab-Islamic-American Summit for a vision of peace, security, and prosperity, and unity in conquering extremism and terrorism. The Ambassador affirmed Pakistan's role and great sacrifices in this effort.

Ambassador Hale thanked General Bajwa for his public commitment on May 18 that Pakistan is taking measures to ensure that militants do not use Pakistan's soil to conduct attacks against any country.

In this vein, during their meeting General Bajwa offered renewed assurances that Pakistan would not permit its territory to be used to plan or conduct attacks against Afghanistan.

The Ambassador and General Bajwa reiterated their nations' commitment to a secure, stable, and prosperous Afghanistan.