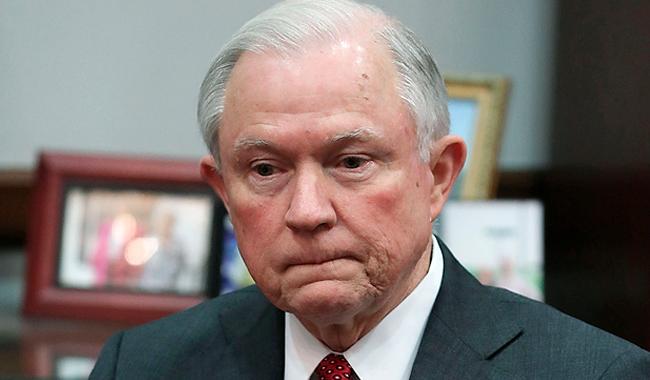 WASHINGTON: US Attorney General Jeff Sessions announced Thursday he would recuse himself from any probe into the presidential election campaign as Donald Trump´s administration moved to cut short a snowballing controversy over its ties to Russia.

Facing calls to resign over newly revealed meetings he held with Russia´s ambassador before the election, Sessions denied any impropriety or that he lied about those encounters in his Senate confirmation hearing.

The Republican US president declared his "total" confidence in Sessions -- while adding that he "wasn´t aware" of the contacts between Ambassador Sergey Kislyak and Sessions, who was a senator actively supporting his campaign at the time.

But top US Democrats -- unswayed by Sessions´s account of events -- maintained their calls for him to step down immediately, accusing him of perjury.

They also called for an independent prosecutor to investigate contacts between the Trump campaign and Moscow, which US intelligence says interfered in the election to hurt Trump´s Democratic rival Hillary Clinton.

Adam Schiff, a Democratic ranking member of the House Intelligence Committee, rejected Sessions´s claim that his contacts with Kislyak were unrelated to his work with the Trump campaign as "simply not credible."

"In the midst of a Russian campaign aimed at undermining our election and as a highly visible proxy for candidate Trump, Sessions would have had to be extraordinarily naive or gullible to believe that the ambassador was seeking him out in his office for a discussion on military matters, and Sessions is neither," Schiff said in a statement.

"I have come to the reluctant conclusion that the Attorney General should step down," he said, echoing calls made earlier by the top Democrats in both chambers of the Republican-controlled Congress.

Trump has come under increasing pressure over Russia´s interference in the election and alleged contacts between his entourage and Moscow.

Late Thursday he defended Sessions as an "honest man" and accused Democrats of having "lost their grip on reality" and carrying out "a total witch hunt!"

Sessions, Trump said in a statement, "did not say anything wrong. He could have stated his response more accurately, but it was clearly not intentional."

According to officials, US intelligence agencies and the Federal Bureau of Investigation continue to investigate just how and how much Moscow intruded into US politics, and whether that effort -- which US intelligence chiefs say was directed by President Vladimir Putin -- involved collusion with the Trump campaign.

Four congressional committees have opened probes into the issue, though Democrats fear that Republicans will seek to bury their investigations to protect Trump´s young administration.

The meetings that Trump aides and supporters had with the powerful Russian envoy to Washington have become a key focus of the probes.

Two weeks ago Trump´s newly appointed national security advisor Michael Flynn was forced to resign amid controversy over his discussions with Kislyak in late December, when the Obama administration was hitting Moscow with retaliatory sanctions and expulsions for its election interference.

On Thursday The New York Times reported that Flynn had also met the diplomat in Trump Tower in December, with Trump son-in-law and senior advisor Jared Kushner also in attendance.

While meetings between political campaigns and diplomats are generally common, on Thursday a Clinton spokesman said there were no meetings or calls between her team and any Russian official during the campaign.

Sessions´s own meetings with the envoy took place much earlier, in July and September, just as accusations of Russian interference in the election were mounting, according to The Washington Post.

Yet Sessions had told his confirmation hearing in January that he "did not have communications with the Russians" and did not know of any by other campaign staff.

Sessions clarified Thursday that his denial referred to contacts made on behalf of the campaign. He said he met Kislyak in his capacity as a senator, and discussed mainly global politics with him.

Nevertheless, after reviewing ethics rules for his office, he said: "I have decided to recuse myself from any existing or future investigations of any matters related in any way to the campaigns for president of the United States."

"When you evaluate the rules, I feel that I should not be involved in investigating a campaign I had a role in."

Despite the swirling controversy, few hard facts are publicly available on what US investigators know and suspect about the contacts and about Russia´s alleged operation to disrupt the election last year.

The New York Times reported two weeks ago, citing US intelligence sources, that three Trump campaign staff had communicated with Russian intelligence officers over the past year.

The White House labeled that report "false" and has accused Democrats, the media and the intelligence community of a political effort to undermine the Trump administration.

Trump´s White House has lobbied the FBI, reportedly the CIA and two Republicans who head committees leading investigations into Russia´s election meddling, to knock down media reports on the alleged links.

That added to Democrat worries that investigations could be tainted, and lawmakers were pressing for an independent counsel to be named to study the web of allegations about Trump and Russia free from political interference.