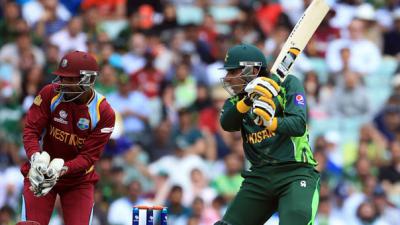 Christchurch: The 44-day World Cup is barely a week old and Pakistan and the West Indies are already viewing their second match as crucial to morale and potentially to their survival.

Both suffered first game defeats and both are embroiled in off-field controversy, with their Pool B clash in Christchurch on Saturday likely to be decided by the team best able to overcome disharmony in the ranks.

Before the tournament, Pakistan and the West Indies, along with South Africa and India, knew that on world rankings they should fill the four Pool B quarter-final slots ahead of Zimbabwe, Ireland and the United Arab Emirates.

But when Ireland reprised their giant-killer role to beat the West Indies in Nelson it became clear to Pakistan that they in turn could not afford to fall to a wounded Caribbean side determined to claw back lost points.

Pakistan skipper Misbah-ul-Haq was aware of the magnitude of the task facing his side even before the Ireland result.

"I think we need to win the next game. That´s the only way to stay in the tournament," he said when reviewing his side´s 76-run opening loss to India.

All-rounder and former West Indies captain Darren Sammy was equally blunt in his assessment of his side.

"If we continue to play like that we won´t be here for long for sure," he said after the four-wicket loss to Ireland.

Against India, Pakistan´s batting was miserable with only Misbah getting more than 50 as the team was rolled for 224 in 47 overs when chasing 300.

The bowling was no better with Sohail Khan the exception with his five for 55 off his 10 overs.

The West Indies at least had a century maker in Lendl Simmons who scored 102 of their 304 against Ireland, but captain Jason Holder was unable to generate any venom in the bowling attack.

Ireland reached 273 for two before losing four quick wickets when the result was already beyond doubt.

The problems facing both sides are similar.

On the field, Pakistan are short of leading paceman Umar Gul, ruled out of the World Cup because of injury, and spinner Saeed Ajmal who was withdrawn because of his disputed bowling action.

In the West Indies camp, the loss to Ireland has put the spotlight on the selection of 23-year-old Holder as captain, and his need to win the respect of senior players, after a shake up following a player revolt.

Sammy was involved in several on-field discussions during the Ireland match although he maintained afterwards Holder had his full support.

Chris Gayle, who is capable of changing a game when on form, has been critical of the make up of the World Cup squad.

On the bowling front, they are without Sunil Narine who pulled out of the World Cup saying he needs more remedial work on his questionable bowling action.

The West Indies may be referred to as a side that has twice won the World Cup but in reality there is no comparison between this unit and the great Caribbean teams of the past.

The last time West Indies reached the semi finals was back in 1996 while Pakistan, the 1992 champions, were semi-finalists at the last Cup in 2011. (AFP)