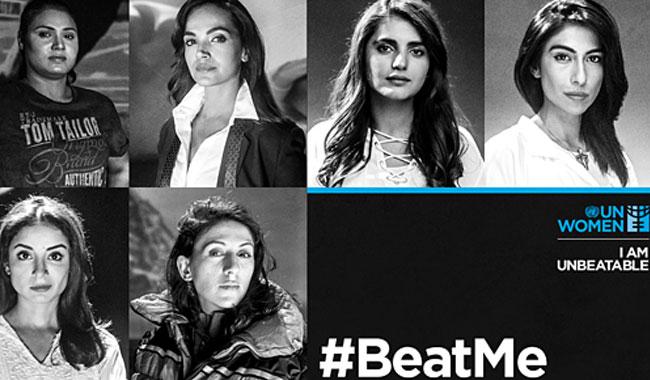 The women's protection bill in Pakistan became quite controversial a couple of months ago when it was seen by some as too liberal and anti-men. A debate stirred whether husbands were entitled to beat their wives or not. However, Pakistan's female celebrities which include (to name a few) Sana Bucha, Sarwat Gillani, Aamina Sheikh and Momina Mustehsan made it quite clear which side of the fence they were sitting on, in their latest 'beat me' video which is a part of UN  Women Pakistan's anti-violence campaign.

Aamina Sheikh chimes in by saying,"Aagay barho (move forward)" as Samina Baig urges the opposite gender to 'beat me to the top of the mountains'.

The video ends with a pregnant woman saying an emotionally captivating and powerful line,'Beat me at life'.

The 'beat me' video is a cleverly crafted video with an important message for the opposite gender; to not subject women to harsh treatment. It also urges men to compete with women in various fields such as education, entertainment and sports rather than consider them inferior.

"In a compelling paradox, the campaign showcases a woman inviting a man to beat her - but at things she is good at. The campaign, aims to inspire women to reaffirm that they are stronger than they are made to believe, and aims to shatter the perception that a woman is weak, taking her from someone who is ‘beatable’ to being ‘unbeatable’," reads a post on the UN Women Pakistan's website.