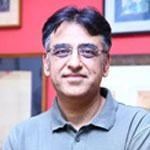 I would like to connect the budget presented on 11th of June with the vision of the Prime Minister Imran Khan, who said on the occasion of launching PTI manifesto in 2018: “A Pakistan where all are equal before the law and where all have equal access to health, education and opportunity in every field. A Naya Pakistan that will place the life and dignity of all its citizens above all else.”

I will highlight how PTI government has made progress in all four areas of its 2018 election manifesto which deal with the uplifting of socio-economic conditions of citizens.

First of these areas was strengthening the Federation. It is for the first time that a government in a single year has initiated, approved and started implementation of four Regional Integrated Development Plans: (i) Accelerated Development Plan for poorest districts of Balochistan; (ii) Gilgit-Baltistan Development Package; (iii) Karachi Transformation Plan for the capital of Sindh; (iv) Sindh Development Plan for 14 Priority Districts. These are historical development packages and each of these comprises projects worth several hundred billion rupees. From its first year, the Imran Khan government had enhanced allocations for the merged districts of KP, the erstwhile FATA. The PSDP allocations for these districts have been increased by 130 per cent in last three years. The first practical steps towards a south Punjab province by establishment of a South Punjab secretariat, is also a promise of Imran Khan which is being implemented in reality.

PTI’s 2018 election manifesto pledged promotion of inclusive economic growth, which covered thirteen different areas of reforms, economic revitalization and job creation. PTI government inherited an economy in August 2018 which was plagued by unsustainable external deficits and was defaulting on external payment obligations. The government embarked on a stabilization program and took decisive actions from the very first month of its term. The tough measures taken in the first two years resulted in successfully stabilizing the economy and setting the stage for sustainable growth.

Unfortunately, Pakistan along with the rest of the world was faced with COVID, which led to a massive of loss of lives and a worldwide economic recession. The government implemented a COVID-19 response plan, which was based on protecting lives and livelihoods. This balanced and centrally coordinated response not only was successful in limiting health damage and negative impact on the economy, but was globally appreciated. The timely fiscal response by finance ministry and decisive steps by the central bank ensured the economic engine kept humming. A massive Ehsaas emergency cash relief ensured those worst affected by the pandemic met their minimum needs. The construction sector saw a revolutionary incentive package whose implementation is being personally led by the prime minister. Resultantly, the economy saw a rapid V-shaped recovery.

The growth momentum became visible by the middle of the current fiscal year. Large scale manufacturing, revenue collection, exports, industrial electricity consumption and private sector credit offtake started to show strong growth. Agriculture, the largest employment sector in Pakistan, and construction, the largest employment urban sector, are both seeing strong growth. The economy is thus generating jobs needed by the large youth population of the country. Higher skilled jobs are being generated by the fast growing IT sector which saw growth of 46 per cent in exports during first 10 months of the year, as well as the manufacturing sector.

PTI’s 2018 election manifesto also pledged to ‘uplift agriculture, build dams and conserve water’. In order to achieve food security and generate affordable clean electricity, the share of PSDP allocation for the water sector has jumped from four per cent of total PSDP in 2016-17 to 10 per cent in 2021-22. Mega hydel projects like Dasu, Mohmand and Diamir-Bhasha are being undertaken concurrently to make up for decades of neglect. Policy measures like increase in support price for wheat and enforcement of farmers’ rights for sugarcane have resulted in better prices for the growers. This year saw the highest ever production of wheat, rice and maize. Sugarcane was the second highest ever. As a result the farmers’ income across the country grew by unprecedented 32 per cent from Rs2,300 billion in FY2019-20 to Rs3,100 billion in 2020-2021.

The fourth and final part of PTI’s 2018 election manifesto which dealt with socio-economic aspects was to ‘revolutionize social services’. Fundamental reforms have been undertaken. Expanded safety net through Ehsaas, revolutionary health initiatives like Sehat Insaf Card, skilling and empowering the youth through Hunarmand Skill for All program and Kamyab Jawan Program. Overall, share of PSDP allocation on Social Sector has jumped from 11 per cent in 2016-17 to 20 per cent in 2021-22. Higher education development budget has more than doubled since PTI government was formed. The investment in the environmental programs has grown by 16 fold vs five years back. This budget reinforces these revolutionary programs and each one of these elements has seen significantly higher allocations in the budget for next year.

Under the leadership of Prime Minister Imran Khan, the government is implementing policies for every promise the PTI made, which are now demonstrably translating into results. There can be no doubt about the commitment to the vision of an Islamic welfare state – an egalitarian society based on the rule of law and economic justice, and one that provides a safety net for the most vulnerable members of society; at the same time promoting investment-friendly environment for wealth creation for sustainable economic growth.

Naya Pakistan is harnessing this great nation’s enormous potential as it now confidently marches towards growth and prosperity. Pakistan Paindabad!

The writer is federal minister for planning, development, and special initiatives.