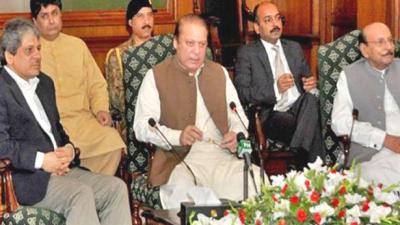 The PM while chairing a high-level meeting directed the concerned authorities to thoroughly investigate the killing of three workers of Muttahida Qaumi Movement (MQM) and bring the culprits to justice. He further said that his visit to Karachi was aimed at discussing ways and means to restore peace in the city and mentioned that the Karachi operation was showing good results.

The Prime Minister who earlier met the families of the slain workers Sohail Ahmed, Faraz Alam and Rehan at the Governor House expressed deep grief over their death.

He said that both the Governor and CM Sindh should maintain harmony between their two respective parties and that all issues should be resolved at the provincial level.

He went on to say that all provincial matters should be discussed and resolved through dialogue.

The CM Sindh also briefed the PM regarding progress on the implementation of the National Action Plan (NAP) as well as establishment of special courts.

The PM said that the NAP was meant to root out terrorism and extremism from the country and it had the support of all major political parties. He mentioned that NAP was the outcome of joint efforts of all political parties and the document was duly signed by their representatives.