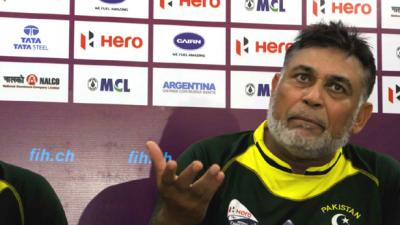 ISLAMABAD: Pakistan's hockey coach on Tuesday blamed the government for the team's failure to qualify for next year's Olympics, saying lack of funds had badly hurt their preparations.

Pakistan finished a poor eighth in the World Hockey League semi-finals in Antwerp on Saturday, a tournament which served as qualifying for the Games in Rio de Janeiro, Brazil. The team needed to finish in the top five to have any chance of qualifying.

It will be the first time in Pakistan's 67-year history that they will not feature in the field hockey event at the Summer Games, a failure which prompted Prime Minister Nawaz Sharif to set up a committee to investigate.

Coach Shahnaz Shaikh said the government had not funded the team properly.
"As a head coach I take the responsibility but I had been asking the federation, the ministry and the government for funds -- without funds we were not able to prepare properly," Shaikh told reporters on the team´s return at Islamabad airport.

"We need to pour money in hockey to lift the structure and give financial support to the players who don´t even have a contract."

Shaikh said players had to live with an allowance of just $20 a day in Belgium.
Pakistan, three-time Olympic and four-time world champions, have rapidly slumped in the sport. They finished a poor 12th and last in the 2010 World Cup held in India.

Pakistan also failed to qualify for the 2014 World Cup and were seventh in the 2012 Olympics in London.