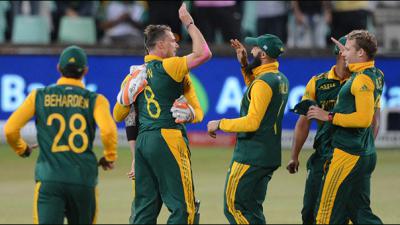 Durban: Dale Steyn ended a short but brutal rampage by Chris Gayle to open the way for South Africa to beat the West Indies in a rain-affected first one-day international at Kingsmead on Friday.

The hosts won by 61 runs according to the Duckworth/Lewis method when the tourists were bowled out for 164. South Africa made 279 for eight before their innings was cut short by rain after 48.2 overs.

Chasing a reduced target, which eventually became 225 runs off 32 overs after another brief interruption, Gayle led the West Indies to a storming start as he and Dwayne Smith put on 51 for the first wicket inside the first six overs.

Gayle, who played match-winning innings in both Twenty20 internationals he played in ahead of the one-day series, swung at almost everything as he made 41 off 24 balls, with two sixes and five fours.

He hit two fours in Steyn´s first over -- one a top edge over wicketkeeper AB de Villiers -- but swung once too often and edged a catch to De Villiers.

Johnson was dismissed in the next over by Vernon Philander and the West Indies lost wickets at regular intervals as they fell further and further behind the asking rate. "We made a start but lost our way in the middle," said new West Indies captain Jason Holder.

Half-centuries by Hashim Amla, man of the match De Villiers and David Miller enabled South Africa to make a total which De Villiers said he was always comfortable with.
"There was a lot happening in that wicket," he said.

South Africa were rocked by two early wickets and were pegged back towards the end of the innings but runs flowed freely in between as De Villiers shared partnerships of 99 with Amla and 123 with Miller, both at slightly better than a run a ball.

Amla and De Villiers, South Africa´s champion batting pair, came together with the total 16 for two in the fifth over and the runs soon started to flow.

Amla reached 5000 one-day international runs in his 104th match -- fewer than any other batsman -- when he went past 54. He hurried to 66 off 66 balls before he was run out attempting a second run to deep point, failing to beat a superb throw from Andre Russell.

The left-handed Miller made 70 off 68 balls before his dismissal, with the total on 238 in the 40th over, sparking a collapse in which five wickets fell for 41 runs in 9.2 overs.

Pak vs Zim: Complete schedule of T20 series between men in green and chevrons

Pak vs Zim: Pakistan to give youngsters a chance in upcoming series