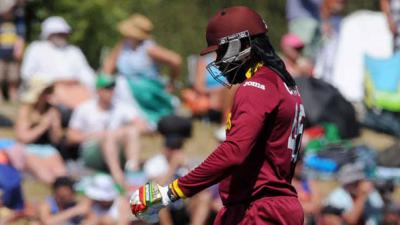 WELLINGTON: West Indies believe Chris Gayle will have a major impact on Saturday´s World Cup quarter-final against New Zealand even if he´s only half fit.

Gayle missed Sunday´s six-wicket win over the United Arab Emirates in Napier, which secured the West Indies´ place in the last eight, after failing to shrug off his latest back problem.

In his absence, Johnson Charles, originally summoned to replace Darren Bravo, seized his opportunity to impress with a fine innings of 55.

Gayle, 35 has had a roller-coaster tournament with his World Cup record 215 against Zimbabwe in Canberra on February 24 being the only time he has got past 50.

Johnson´s half century against the UAE will put the pressure on Gayle´s opening partner Dwayne Smith to keep his place after a miserable tournament in which his top score is just 31 in six innings.

"Obviously, Johnson had a very good day. And I would say he´s pretty much secured a spot for the next game. But we´ll sit down, discuss and see what conditions we´re up against and make a decision," said Holder.

Big-hitting New Zealand batsman Kane Williamson said the Black Caps will be wary of the potential match-winning credentials of Gayle.

"Everyone knows what Chris Gayle can do and he is one of the biggest match winners in world cricket, so it´s important we put a little bit of focus on him," said Williamson whose mighty six gave New Zealand their tense one-wicket win over Australia in Auckland last month.

New Zealand have won 23 of the 53 completed ODIs against the West Indies but lost their last meeting, in Hamilton in 2014, by 203 runs.

However, the Black Caps will still be favourites to make the semi-finals, having won all of their six group games in the first round. (AFP)