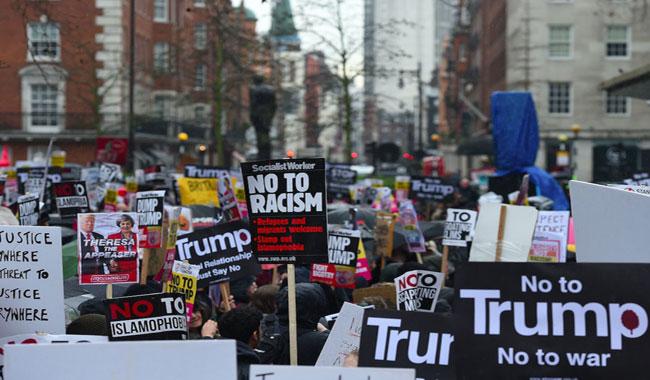 The government quickly announced its intention to appeal the decision -- the latest in a series of stinging judicial defeats for the Republican billionaire, who took office in January -- to the Supreme Court.

At issue was the intent behind the measure -- whether or not it deliberately singled out Muslims by targeting nationals from Iran, Libya, Somalia, Sudan, Syria and Yemen. The US Constitution forbids religious discrimination.

The Fourth Circuit Court of Appeals said it "remained unconvinced" that the part of the measure naming the specific countries had "more to do with national security than it does with effectuating the president´s promised Muslim ban."

The court -- based in Richmond, Virginia -- said it could not find that the government´s security concerns outweighed the plaintiffs´ concerns about discrimination.

"Congress granted the president broad power to deny entry to aliens, but that power is not absolute," Chief Judge Roger Gregory said in the 10-3 ruling.

"It cannot go unchecked when, as here, the president wields it through an executive edict that stands to cause irreparable harm to individuals across this nation."

Gregory said the order "speaks with vague words of national security, but in context drips with religious intolerance, animus and discrimination."

"This Department of Justice will continue to vigorously defend the power and duty of the executive branch to protect the people of this country from danger, and will seek review of this case in the United States Supreme Court," he said.

Trump issued his initial travel ban by executive order in January, but that measure -- which banned entry to nationals from seven countries for 90 days and suspended the nation´s refugee program for 120 days -- was quickly halted by the courts.

A revised executive order announced in March, meant to address the issues raised by the federal judges, deleted Iraq from the list and removed an indefinite ban on Syrian refugees.

It earned widespread scorn nevertheless, including from human rights activists and states led by Democrats.

A district court judge in Maryland issued a nationwide block on the ban´s core provision concerning travel from the short list of countries, sending the issue to the Fourth Circuit.

Given the case´s high-profile nature, the full appeals court in Richmond heard the arguments -- bypassing the usual initial three-judge panel -- for the first time in a quarter-century.

In a May 8 hearing, acting solicitor general Jeffrey Wall, representing the government, insisted that Trump "never intended for that to discriminate on the basis of any particular religion."

"He made clear he was not talking about Muslims all over the world," he said. "That´s why it´s not a Muslim ban."

But Omar Jadwat, a lawyer for the American Civil Liberties Union -- which represented the associations who were the plaintiffs in the case -- argued that Trump the candidate made clear he wanted to ban all Muslims for a time while studying enhanced immigration vetting.

"We won," the ACLU and Jadwat tweeted Thursday.

"The Constitution´s prohibition on actions disfavoring or condemning any religion is a fundamental protection for all of us, and we can all be glad that the court today rejected the government´s request to set that principle aside," Jadwat said.

A federal court in Hawaii has issued a broader injunction that halted both the travel ban and the suspension of the US refugee admissions program.

The White House is fighting that ruling in the Ninth US Circuit Court of Appeals, based in San Francisco, which heard the case on May 15. A decision is pending.