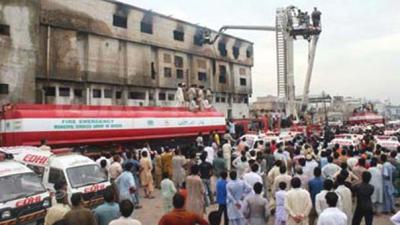 KARACHI: The government has placed names of six suspects on the Exit Control List (ECL). The individuals were named in the Joint Interrogation Team’s (JIT) report regarding the Baldia factory fire which claimed over 250 lives.

A notification confirming the inclusion of the names in the ECL was issued on Thursday. Rizwan Qureshi, Javed Shakeel, Hamad Siddiqui, Abdur Rehman aka Bhola, Asghar Baig and Majid Baig’s inclusion in the ECL bars them from leaving the country.

Earlier this month the Rangers submitted a JIT report before the Sindh High Court which revealed the 2012 factory fire was not caused by a short circuit but in fact was an act of arson. The report claimed that Ali Enterprises was set alight because the owners refused to pay extortion money.

According to the report, a prime suspect confessed to committing arson during interrogation. More than 250 employees were charred to death when a fire broke out at Ali Enterprises in Baldia Town back in 2012.