'They raped us one by one,´ says Rohingya woman who fled Myanmar 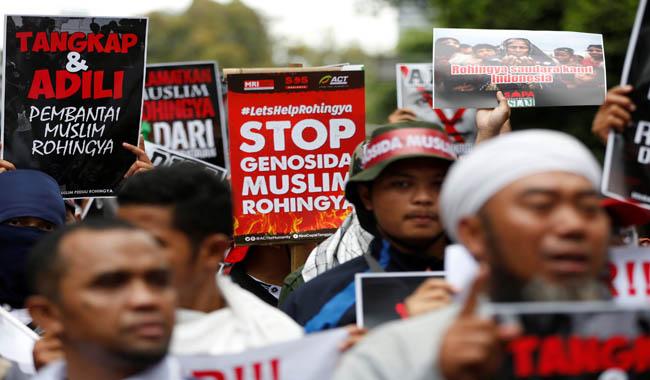 TEKNAF: The brutal gang rape that Habiba and her sister endured is a story that is becoming depressingly familiar among the thousands of Rohingya refugees fleeing to Bangladesh to escape the violence of Myanmar´s soldiers.

"They tied both of us to the bed and raped us one by one," said 20-year-old Habiba, who has now found shelter with a Rohingya refugee family a few kilometres (miles) from the Bangladesh-Myanmar border.

"We´re almost starving here. But at least no one is coming here to kill or torture," said Hashim Ullah, Habiba´s older brother who escaped with his sisters.

Habiba and her sister Samira, 18, say they were raped in their home in Udang village by troops who then burnt down their house. "They torched most of the houses, killed numerous people including our father and raped many young girls," said Habiba, who agreed to be identified in this story.

"One of the soldiers told us before leaving that they will kill us if they see us around the next time they come here. Then they torched our house."

Widespread allegations of rape have raised fears that Myanmar´s security forces are systematically using sexual violence against the stateless Rohingya.

The violence has forced thousands to flee, prompting a UN official to accuse Myanmar of carrying out "ethnic cleansing" of the Muslim minority.
Hashim Ullah and his siblings escaped after taking the family´s $400 savings and walking to the Naf River that separates southern Bangladesh from Myanmar´s Rakhine state.

The trio spent four days hiding in the hills with hundreds of other Rohingya families, before they found a boat owner willing to take them to Bangladesh. "He asked for all of our money," Ullah said.

The boat owner left them on a small island near the border. The siblings walked across the scrubland until they found a Rohingya family who offered them shelter.

Similar stories of violence and dispossession fill the rows of plastic-roofed shacks that have become the only refuge for thousands of Rohingya Muslims who have fled Rakhine state.

The escapees have told of gang rapes, torture and murder being carried out by Myanmar troops in the small strip of land that has been under military control after deadly raids on police border posts last month.

Foreign journalists and independent investigators have been barred from entering the area. While the military and government have rejected the charges, rights groups have long accused the military of using rape as a weapon of war in several other ethnic conflicts which simmer in the country´s borderlands.

Thailand-based NGO the Womens League of Burma has documented 92 cases of sexual violence by fighters between 2010 and 2015, which they say have been used "as a means of shaming and destroying ethnic communities".

The volume of rape allegation among the Rohingya fleeing Rakhine suggest a pattern of abuse by Myanmar´s army beyond anything documented before.

Mujibullah arrived in Bangladesh on Monday with his sister Muhsena.

The pair fled after four soldiers tried to rape her. The soldiers were tying Muhsena, 20, to a pole in their village when Mujibullah intervened, receiving a brutal beating in exchange.

"One soldier tried to hack me with a knife as I threw myself to them, begging them not to destroy her life," Mujibullah said, showing an inch-long wound on his palm.
Muhsena stood close to her brother as he spoke to AFP, but she choked up every time she tried to speak.

Hundreds of thousands of registered Rohingya refugees have been living on the Bangladesh side of the border for decades, having fled violence and poverty across the border.
In Myanmar the Rohingya are seen as illegal immigrants and labelled "Bengali", even though many have lived there for generations.

They are denied citizenship and face severe restrictions on movement, work and basic access to education and hospitals. But Dhaka has resisted urgent international appeals to open its border to avert a humanitarian crisis, instead telling Myanmar it must do more to prevent the stateless Rohingya minority from entering.