Olympic flame hero only told an hour before 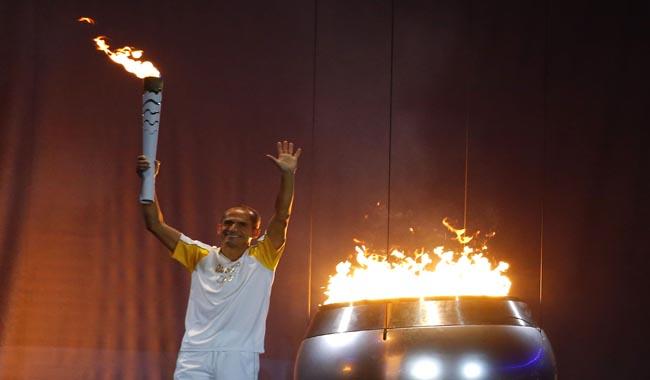 Rio de Janeiro, Aug 6, 2016 (AFP) -Vanderlei Cordeiro de Lima knew he would be watching the Rio Games opening ceremony. He just didn´t realize he would be the one walking up to light the Olympic flame.

"They substituted me for Pele at the last minute, man! It was a surprise, I wasn´t expecting it," he said.

The marathon runner, whose heart-breaking and heart-warming story of a 2004 bronze medal at the Athens Games endeared him to Brazil, told reporters he was given the honor with barely an hour to go.

Football legend Pele had been Olympic organizers´ first choice. But the 75-year-old confirmed only Friday that his health would not make it possible for him to climb the steps to the cauldron in the Maracana stadium later that day.

The far less well known de Lima had been touted as one of the possible alternatives. However, he told Brazilian sports newspaper Lance the call only came after he arrived at the stadium to watch the show -- along with 78,000 others and hundreds of millions more on television.

"It was about an hour or so before," he was quoted as saying.
De Lima is not exactly a household name but his story occupies its own place in Olympic legend.

In 2004 he found himself taking the surprise lead in the marathon at about half way point. With four miles to go, gold glory was in reach.

It was then that a deranged former Irish priest sprinted across the street and pushed the runner into the crowd lining the street.

By the time he´d got free, with the help of spectators and a policeman, de Lima had lost his golden lead.

However, he recovered enough to still manage bronze. And in his humble, forgiving attitude about the incident he won many fans -- as well as the Coubertin medal for sportsmanship.
On Friday night, he buried those difficult memories for ever.

"Today, I received my gold medal," he told Lance after the ceremony.
"To live with this emotion was even greater than winning a medal," he said. "I can share this with the whole country, I can be here representing all of them."
And de Lima said the Maracana show was great for another, maybe even more surprising reason:
"This was the first time I´ve taken part in an opening ceremony. I´ve never taken part, since the marathons are always the last event -- I arrived afterward. So it was very gratifying. I´m very happy."