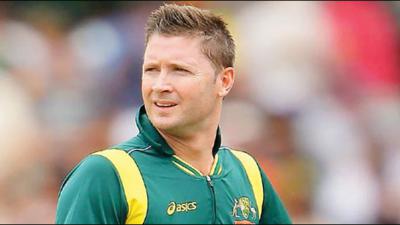 SYDNEY: Captain Michael Clarke admitted Friday he is doubtful for Australia´s World Cup opener against England on February 14 and that medics would make the call.

The 33-year-old has had two easy run-outs in the last week as he bids to recover from hamstring surgery and chronic back pain.

But noting he still had a "gap" to fill to be 100 percent fit, he said he did not know if he would be strong enough in time to play at the top level. I think you should ask that question to the medical staff," Clarke told reporters. I don´t know the answer to that question. I have been following their (medical) guidelines from day one and I´m extremely thankful and grateful that I sit in this position now because of their advice and guidance. So I will 100 percent be dictated by what they feel and believe."

Clarke rebuffed fears he would not be able to play all the games due to a heavy travel schedule including trips to Brisbane, Auckland and Perth. "I´ve missed enough cricket over the last six months," he said. "As soon as I can get back on the park I´m keen to play every game for Australia."

Clarke bowled two overs and knocked a breezy 34 while opening for a Cricket Australia XI against Bangladesh on Thursday.

Clarke hit 51 for a local Sydney team last weekend in his first outing back since a serious hamstring injury forced him to pull out of Australia´s Test series against India in December.

Cricket Australia have given Clarke until the team´s second pool match against Bangladesh on February 21 to prove his fitness for the World Cup.

Coach Darren Lehmann on Wednesday suggested Clarke could ready to play earlier than expected, saying "fingers crossed he might be" as he threw his support behind the middle-order batsman to return as captain. (AFP)