You
By Uzma Mazhar

This week You! takes a look at two footpath schools in Karachi - designed specifically for street children...

This week You! takes a look at two footpath schools in Karachi - designed specifically for street children...

A busy road in Karachi with high flying vehicles zooming left, right and centre; and in the midst of this entire scene one sees children with their teacher merrily reciting poems sitting on the footpath! This is the ‘Footpath School’ initiated by Syeda Anfas Ali Shah Zaidi, President of the Ocean Welfare Organisation.

Under the umbrella of Ocean Welfare, Syeda Anfas works on four areas - Education, Women Empowerment, Environment and Health. She started the ‘Footpath School’ two years ago with just two children and now it has more than a thousand children in the two projects - one at Badar Commercial and another one under the Bahria Icon Tower flyover.

When asked the concept behind the Footpath School, Syeda Anfas says, “Actually, the inspiration came from the street children. The down trodden youth’s main dilemma is financial distress. Such children are vulnerable, easy targets for terrorists to brainwash, hence, I decided to empower them through this project, as educating them is the key.” 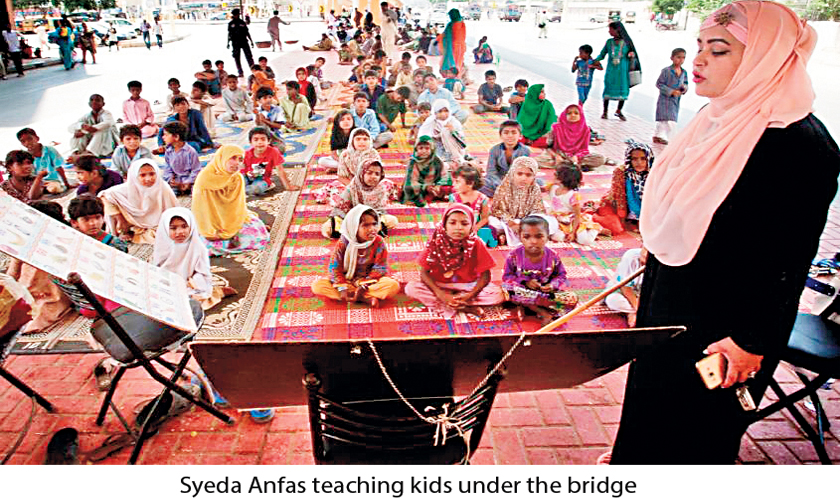 For Syeda, social work started from home, as she saw her grandmother Mehr Sultana, a doctor working in the village free of cost, and her maternal grandmother Suriya Jabeen, a social worker. Syeda firmly believes that when one decides to do charitable work, one has to sacrifice a lot. “Nobody forces me to do this work, I choose to do it. Money is not a compensation for everything. Until and unless I don’t stand here or do the required work, the students or my staff will not take me seriously,” shares Syeda.

Opening more Footpath Schools and Skill Centres in towns such as Sindhiri, Mir Pur Mathalo and Khairpur in Interior Sindh, it was not an easy road to tread. “I don’t like calling ourselves an NGO but I realized if the work is not registered we won’t be able to work properly. Hence I got it registered three years back. Unlike other NGOs our pattern of working is different. I am with these children for more than 12 hours on the road. Which NGO does that? Till date we haven’t received any international, national, government or local funding. As a matter of fact taking funds means working on someone else’s agenda and that we don’t want. If we had the belief that the government and the well-heeled will help, we would not have been sitting on a footpath like this. We want our people to help, after all it is theirs to own,” she stresses.

Currently, the schools are being run on the funds donated by the members of the organisation, friends, family and Syeda’s personal savings. Then they have boxes carried by their volunteers near the school to collect funds - Rs. 10 or 100, whatever one deems to give. “Many well-off people who pass by do not give charity. And then there are those who do give funds but not before talking nonsense. Maybe they feel that these children come from the lower strata of the society; hence there is no need to give them so much importance. On the other hand the common man, rickshaw and truck drivers and even those on scooters are generous enough to donate whatever they can,” informs Syeda. 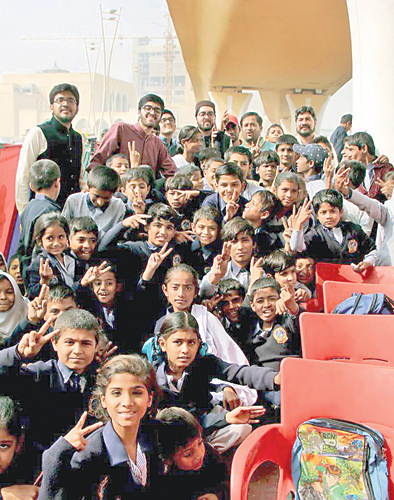 Initially, Syeda and her team had their set of problems and limitations. Unlike today with grilled premises, chairs, tables, blackboards, the school under the bridge literally started out in the open. “We were harassed and threatened when we started off this school. Initially even the children were problematic. Some coming from under this same bridge were into drugs, thefts and criminal activities. It is an ongoing war that we are fighting, but we have managed to stand our ground. This was also made possible with the support of media, both local and international, who helped us grow,” she adds.

Since the age bracket varies from five years to teenagers, it was a challenging task to carefully plan the curriculum for them. “Kids who come here don’t even know how to hold a pencil, so we start from the basics. However, the real issue is psychological as we have to counsel for instance a 17-year-old who has been abused or was into petty crimes. It took us almost a year to gather the children and teach them the basics along with counselling. Today, I can proudly say that a child who didn’t know how to hold a pencil can write an essay in English or Urdu,” she states.

Another concern for Syeda was to gain the trust of children and their parents who were reluctant to send their kids due to financial constraints. “We took their needs in consideration and devised an incentive that offers a stipend of Rs. 50 per day. If four children are coming from one home they are getting Rs. 200 per day which in turn becomes a small monetary help to the poor family. Today the parents, who made their children work in homes or beg, voluntarily bring their kids here to study. We are providing them with all the facilities including uniform, food, healthcare, etc,” adds Syeda.

Coming back to funds and taking this venture to a stable position Syeda Anfas and her team mates’ intentions were constantly scrutinized. She believes that her children should be given a fair chance; a building is not what they need. “Coming from a broken financial background how can we tell these children to wear a uniform and go to a school building? Or giving them broken toys or filled copies. My children will not be treated like this.”

However, Syeda needs funds to support her cause. “We are only asking for regular charity. It doesn’t have to be a big amount. I can easily get foreign funding but I want our people to come forward,” stresses Syeda Anfas.

Nonetheless, there are those who don’t come to support and constantly point fingers instead. The best part is that Syeda pays no heed to things that affect her progress and is keen on taking it forward with a positive attitude. These hurdles or harassment doesn’t disappoint her as her sole motivation is the desire to see the Footpath School progress. “I see a bright future for our school and the children studying here. Unfortunately our NGOs as well as the government misperceive that these children aren’t willing to study. I completely discard this thought, it is a white lie created by people who don’t want to face the ugly reality of our society. Believe me I have been an integral part of this entire process for years and I can assure that they want to receive education and change their lives. Education is not just a source of earning; it rather guides one in the right direction. I ask people to have an open mind and support such causes. And I promise, you will not see even a single child roaming around the streets.

All of them will be going to schools and this will be achieved by the end of five years from now. Our mission is to help them in our capacity by contributing something positive for the betterment of society. I hope we manage to make a mark and bring our people and the government on the same page one day,” concludes Syeda optimistically.

From woes to prosperity

The amazing women of Kalash

"I thought I’d be dead soon with stage IV cancer…"