Thinking beyond men and women

Every time you hear the word ‘transgender’ an image of a flamboyantly decked-up cross dresser comes to mind. Transgenders, in our part of the world, are rarely respected and most of them lead lives of abuse, violence, exploitation and misery.

Kudos to the team that put together Pakistan’s first transgendershoot but will the cause be taken beyond the visual?

Every time you hear the word ‘transgender’ an image of a flamboyantly decked-up cross dresser comes to mind. Transgenders, in our part of the world, are rarely respected and most of them lead lives of abuse, violence, exploitation and misery. These are the same people whose existence in South East Asia dates back more than 4000 years and who appeared in ancient texts as bearers of fortune and fertility but in the so called modern society today, they face open discrimination and ridicule.

Our mental blocks do not allow us to think about ‘transgenders’ beyond what we see (or ignore) at traffic signals. Around the world, transgenders are gracing magazine covers as big as TIME and giving inspiring TED Talk speeches. The case in point here is Geena Rocero, founder of Gender Proud, whose TED speech was labelled as one of the most inspiring speeches of 2014 and has been viewed more than three million times since then. Then you have Carmen Carrerra, who plays a hairstylist in Ricki and the Flash, a movie starring Meryl Streep.  Lea T, known as the first transgender supermodel, has been Givenchy designer’s muse since 2010. From America’s Next Top Model to Game of Thrones, transgenders have had their fair share of success in iconic international projects.

Given the recent incidents of violence against transgenders in the country, Pakistan unfortunately may not be the best place for the tolerance and acceptance of the transgender community but a recent fashion shoot by a Pakistani fashion stylist, Waqar J Khan - that features the renowned transgender Kami Sid - has stirred the issue up on the internet. 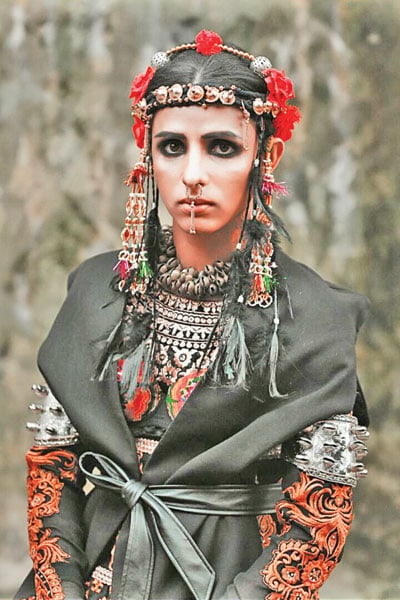 “For me it was not a fashion shoot. It was more like a cause, an awareness campaign. We are capable of all sorts of respectable work provided we are given a chance.” – Kami Sid

In conversation with Instep, Waqar mentioned, “I was deeply shocked by the incident that recently happened in Faisalabad when a transgender was beaten up barbarically. Then what saddened me even more was how conveniently our society takes away from them the right to lead a normal life. A transgender birthday party was called off hours before the function as they were denied access to the hall. These events are thought provoking and moved me from within. So I discussed the idea with Saba Khalid and we engaged Kami Sid who is a very well-known activist for their community. The fashion industry, like any other business, has a social responsibility and this was just an effort to create awareness about the potential that lies in these people and the space they deserve. The shoot is not about the makeup, photography or the dresses; it’s about the fact that if we treat them like any other person, together we can put an end to this discrimination which is unfair at so many levels.”

About the shoot, he added, “Kami instantly agreed to do the shoot. We had names like Haseeb Siddqiui and Nighat Misbah from Depilex on board who voluntarily came forward to be a part of this project. We used Kami’s own wardrobe for the shoot and we have not diluted the message by adding any designer wear.”

Instep also got in touch with Kami Sid who shared, “For me it was not a fashion shoot. It was more like a cause, an awareness campaign. Unfortunately our people think that our community is only good for begging and dancing publically. We are capable of all sorts of respectable work provided we are given a chance. I hope this campaign serves the purpose and creates the right kind of awareness.”

Kami Sid, who is a well-known activist, represents Pakistan at the Asia Pacific Transgender Network and is in a process of establishing her own NGO. She is also flying to Zurich next week to speak at one of the LGBT events organized by the UN.

For a society to progress in its true sense it needs to be tolerant and it needs to encourage diversity. This campaign is definitely a step in the right direction, especially since we see transgenders employed in the beauty industry worldwide and also, to some extent, in Pakistan. Let’s just hope that our designers wake up to the cause and help make runway stars like Ines Raus and the Lea Ts of this world.

– Sadiq Saleem is a Dubai based entertainment journalist. He is also an Instep correspondent and can be contacted on his page fb/sidsaidso