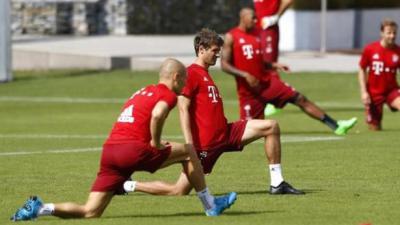 BERLIN: Bayern Munich have set their sights on a record fourth consecutive Bundesliga title when the league gets under way this week, with VfL Wolfsburg ready to resume last season's hunt.

Few doubt the Bavarians, already considered by most Bundesliga coaches as the overwhelming title favourites, can do it.

Coach Pep Guardiola, in his third season in charge, will be looking to set more records after two dominant Bundesliga campaigns.

"No team has ever won the Bundesliga four times in a row," he said. "It is going to be tough but that is our goal."

The Spaniard may still be missing the Champions League title with Bayern but he is the undisputed king of the Bundesliga, having led his team to the title virtually unopposed in the two previous seasons.

He will be fielding a somewhat changed team with fans missing their talismanic midfielder Bastian Schweinsteiger, who joined Manchester United and winger Franck Ribery still nursing a months-long injury.

The Frenchman will miss the start of the season, including the opener against Hamburg SV on Friday, but Guardiola has his replacement ready.

Newcomer Douglas Costa has so far been impressive down the left wing, where Ribery has ruled for years, with the Brazilian's pace, skills and speed opening up defences.

Costa, who joined from Shakhtar Donetsk, Chile international Arturo Vidal and talented 20-year-old midfielder Joshua Kimmich are Guardiola's big transfers but with a squad already brimming with talent and experience, he hopes it is even stronger than last season.

"Normally Bayern will this season be again the measure of all things," said VfL Wolfsburg coach Dieter Hecking. "They are just too far ahead with their potential."

Wolfsburg, second last season, are seen as the strongest rivals to the title, especially after signing forward Max Kruse from Borussia Moenchengladbach but they must hold on to Belgium international Kevin De Bruyne as offers pour in.

The attacking midfielder, their key player in last season's second place finish and German Cup victory, is being courted by Manchester City with sports director Klaus Allofs saying his "head is being turned" by the offers.

Thomas Tuchel has the unenviable task of succeeding title-winning coach Juergen Klopp on the Borussia Dortmund bench and must rebuild a competitive team after last season's implosion.

The 2011 and 2012 German champions look to be on track after a 6-0 aggregate win over Austria's Wolfsberger AC in the Europa League and a comfortable German Cup first round win last week.

Borussia Moenchengladbach, third last season, are also in fine form in the pre-season and with a string of transfers, including Swiss striker Josip Drmic, boosting the squad, they also eye their maiden Champions League season with confidence.