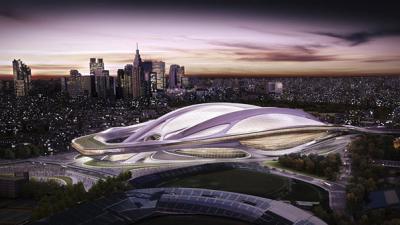 TOKYO: Japan expects the cost of the 2020 Olympic stadium to rise to 252 billion yen ($2 billion), the country´s sports minister said on Monday.

Hakubun Shimomura confirmed that the price tag represented a 90 billion yen hike since the futuristic design by Iraqi-British architect Zaha Hadid was chosen in 2012.

Construction is set to begin in October with May 2019 the projected completion date -- two months later than initially planned and just in time for the rugby World Cup, Tokyo 2020 leaders said.

Shimomura held talks with Tokyo governor Yoichi Masuzoe, with whom he has publicly clashed over the government´s insistence that Tokyo pay 50 billion yen towards the cost of the stadium, as well as new Olympics minister Toshiaki Endo.

Tokyo 2020 president Yoshiro Mori and Japan Olympic Committee president Tsunekazu Takeda were also among those in attendance at the first top-level meeting of leading Games officials since Endo´s appointment.

"The cost has become 252 billion yen," Shimomura told reporters. "We hope to raise around 20 billion yen with help from the private sector to keep the national taxpayers´ burden in check."

While the stadium´s basic design will be kept, its planned retractable roof will, as expected, be added after the Olympics and Paralympics, organisers said, while the number of permanent seats will be reduced from 80,000 to 65,000 after the Games.

Endo, who last week became Japan´s first Olympics minister, is likely to act as a buffer between the government and the Tokyo city authorities as the feuding parties continue to squabble over funding for the venue, which will be built on the site of the 1964 Tokyo Olympics centrepiece.

Masuzoe likened the government to the "Imperial Army" for demanding that Tokyo foot part of the bill and criticised them for failing to negotiate harder as contractors raised their prices.

Critics claim that two giant arches which run the length of the stadium are to blame for much of the inflated cost of the building. (AFP)

Pak vs Eng: Front foot no-ball tech to be tested in England-Pakistan series