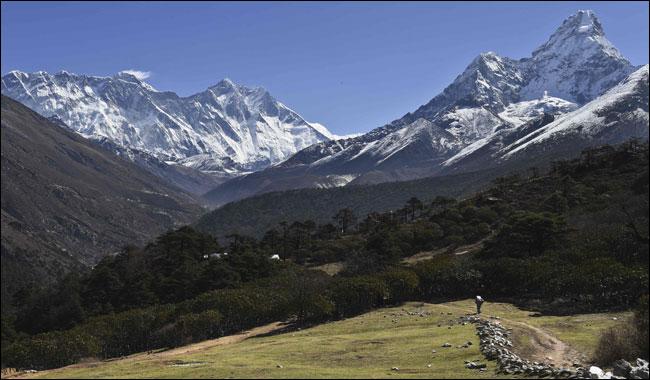 KATHMANDU: Three climbers died on Everest over the weekend and another is missing, officials confirmed Monday, in one of the deadliest episodes on the peak since an avalanche swept through base camp killing 18 two years ago.

More than a dozen climbers have also been rescued from the 8,848 metre (29,030 foot) mountain in the last three days after running into difficulties while attempting to summit, helicopter rescue operators told AFP.

The weekend deaths appear to be related to altitude sickness and bring the toll to five during a season that has been hit by unpredictable weather, strong winds and unusually cold temperatures.

The weather calmed over the weekend, opening a narrow window for climbers to make a bid for the top.

Despite the large numbers crowding towards the peak, there have been no reports of long queues delaying climbers.

More than a hundred climbers are expected to attempt to summit from Nepal´s south side on Monday before the weather changes, bringing strong winds, according to forecasts.

He was above the 8,000 metre mark -- known as the mountain´s "death zone" -- when he died, an area that also claimed the life of American climber Roland Yearwood.

The death zone is notorious for its difficult terrain and thin air, where low levels of oxygen heighten the risk of altitude sickness.

An Australian climber died on the Tibet side of the mountain, local media reported, quoting the Tibet Mountaineering Association.

The 54-year-old from Queensland was reportedly hit by altitude sickness after reaching 7,500 metres and died as he was trying to descend.

A fourth climber has been missing since Saturday when he lost contact shortly after reaching the summit. His Nepali guide was found unconscious at Camp 4, just below 8,000 metres, with severe frostbite.

A search operation is under way for the climber, who is from India´s northern Uttar Pradesh state, but authorities at base camp were unable to contact the rescue team on Monday morning.

Legendary Swiss climber Ueli Steck died in late April while on an acclimatization climb, and 85-year-old Min Bahadur Sherchan perished attempting to reclaim his title as the world´s oldest person to summit Everest.

More than 120 climbers have successfully summited Everest from the south side so far this season with another 80 reaching the peak from the Tibet side.

Hundreds are still waiting to summit before the monsoon arrives in early June, marking the end of the short spring climbing season.

Last year Everest claimed the lives of five climbers, while a total of 640 people summited from both sides of the mountain.