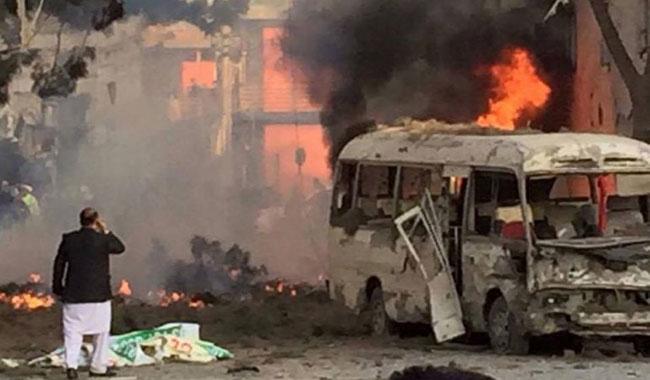 At least one woman was killed and 19 others wounded in the powerful blast, which left the bus badly mangled and the area littered with smouldering debris and twisted metal.

No group has so far claimed responsibility for the assault, but it comes as the Taliban step up attacks even before the official start of the annual spring offensive.

"There has been an explosion against a minibus in Kabul," Kabul police spokesman Basir Mujahid told AFP, adding that more casualties were feared.

Security officials cordoned off the area as firefighters and ambulances rushed to the scene. It was not immediately clear who was on board the bus.

"The explosion was caused by a roadside bomb," interior ministry spokesman Sediq Sediqqi said on Twitter. "Three people have been detained in connection with the explosion."

The defence ministry insists only around 30 people were killed by five attackers. But security sources and the survivors, some of whom counted dead bodies, said the death toll exceeded 100.

The carnage inside the heavily guarded hospital points at a spectacular intelligence failure and spotlights how insurgents have managed to infiltrate top government and military institutions in Afghanistan.

The savagery of the assault was characterised by how the assailants stabbed bed-ridden patients, threw grenades into crowded wards and shot people from point-blank range.

The Afghan defense ministry said a government commission had been set up to investigate the attack. The violence underscores rising insecurity in Afghanistan.

Democracy books start to disappear from libraries in Hong Kong