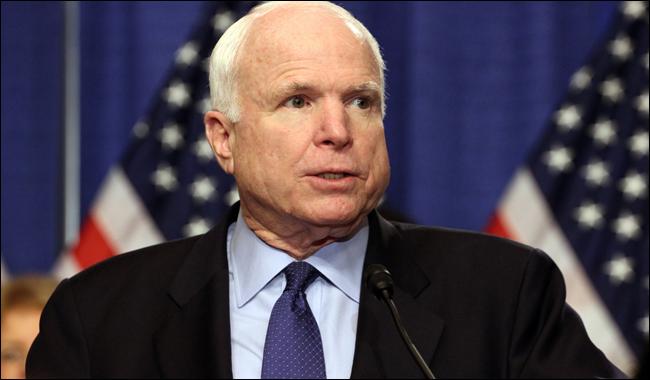 WASHINGTON: A senior Republican lawmaker on Sunday challenged President Donald Trump to prove his claim that his phone was tapped by predecessor Barack Obama during last year´s campaign -- or else retract the unsubstantiated allegation.

Senator John McCain, a frequent Trump critic, issued his demand in an interview with CNN.

"The president has one of two choices, either retract, or to provide the information that the American people deserve," McCain said.

"I have no reason to believe this is true, but I also believe that the president of the United States could clear this up in a minute," he continued.

"All he has to do is pick up the phone, call the director of the CIA, the director of national intelligence and say, ´OK, what happened?´ Because they certainly should know whether the former president of the United States was wiretapping Trump Tower."

Obama, through a spokesman, has denied Trump´s claim, which the billionaire-turned-politician made in a series of tweets earlier this month.

Obama´s director of national intelligence James Clapper also said in an interview that there was no wiretap of Trump or his campaign.

But Trump has not walked back his allegation, and the White House asked a congressional committee that is examining Russian interference in last year´s US presidential election to investigate the wiretapping claim as well.

House Speaker Paul Ryan, part of a group of eight top lawmakers who receive classified intelligence briefings, was asked Sunday during an interview with CBS News if he has seen anything to suggest there´s truth to Trump´s claim.

He responded simply: "No."

But Ryan added, "I don´t want to get ahead of the intelligence committees and their thorough investigation."