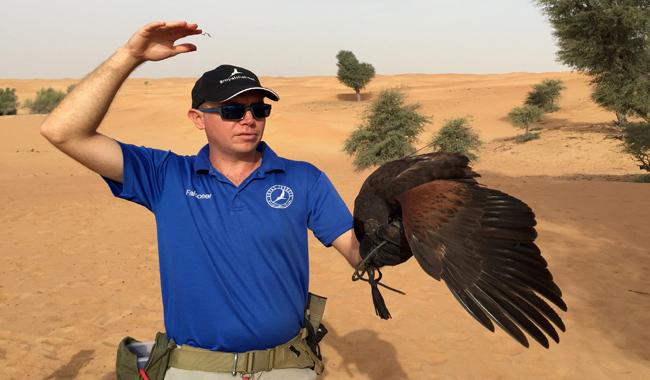 DUBAI:  A South African falconer in Dubai´s desert is shaking up the ancient sport of falconry, marrying one of Arabia´s most cherished customs with the cutting edge world of drones and tiny cameras.

Few foreigners are accepted into this traditional realm, which served as a means of survival in the barren wastes before the era of abundant oil and glassy skyscrapers. But tour operator and trainer Peter Bergh has honed his skills for more than a decade, winning the trust of Dubai´s falcons’ elite.

Bergh puts their flocks through an aerial "gym" he has fine-tuned to give them a 21-century workout.

Chasing specially-modified quad copters and remote control planes painted to look like their turkey-sized quarry, the peregrine falcons must snatch in their claws blobs of feathery quail meat born aloft via rope by the miniature flying machines.

Teaming up with creators of the rising sport of drone racing, Bergh tinkers with aerodynamic bullet-shaped cameras and superfast aircraft to give guests attending his tours a futuristic view into the primal experience of being devoured.

"Over the years we´ve progressively changed the cameras, gone smaller, adapted and modified aero planes to fit these cameras, and some of the footage we´re achieving is radical and we can now put ourselves in the prey´s perspective," Bergh said.

He and his team at Royal Shaheen tours bristle at efforts, most recently by the Dutch police, to put the beaked raptors to work taking down the flying machines, which they warn could slice up and even decapitate the birds.

Operating from Dubai Desert Conservation Reserve´s rolling dunes and gnarled trees, the group cling to the educational uses of drones and seek to capture the action for the sake of its beauty alone.

"Filming it and capturing the style, the flight the aggression, the movement of the body of the birds - it´s fascinating. The technology of the cameras is improving every day, so the future looks really bright," Bergh added.