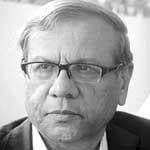 Finance Minister Shaukat Tareen’s May 5 press conference was a breath of fresh air after a decade of fuddling and muddling on the economic front, particularly the last two and a half years. He has presented a vision and signaled that the neoliberal bandwagon of the first decade of the 21st century will not be the engine that drives the economy. Whether one agrees or disagrees with him is another matter and to what extent he succeeds or allowed to succeed is yet another matter.

Three important shifts have been highlighted. One, the shift from stabilization to growth; two, the need to reduce the component of non-development expenditure that the abolition of the Concurrent List vide 18th Amendment mandated; and three, the imperative of capital investment in the agriculture sector. Important also is the acknowledgement that the economy’s capacity to generate more taxes is limited.

The vision that the finance minister laid out is long term and can be likened to building a high-quality highway that permits high speed driving but is riddled with large potholes that can swallow an entire car. The finance minister is the one driving the car on the highway that he is laying out; but is the rest of the government, including the prime minister, and other powerful stakeholders within and outside the state apparatus on board? Or will they be the ones digging the potholes? After all, no policy is implemented by one minister alone – the rest of the government and state apparatuses have to be committed to the programme and act in tandem.

To return to the press conference, some of his assertions can be questioned. His laudatory remarks on revenue collection are off-center. GST growth is from a very narrow base and import duty growth accrues from imports that are financed from foreign loans. Any positive statistics emanating from deepening dependence on foreign debt cannot be positive in itself. His attribution of tax-compliance hesitancy to harassment is also askew. The fact is that the state’s fiscal edifice lacks legitimacy. A state that taxes heavily, but delivers nothing in return, cannot harangue citizens for tax contribution. In any case, the key to restoring fiscal balance is less non-development expenditure, not more revenues.

The finance minister has deemed agricultural growth to be satisfactory; except in cotton, which is a major crop and basic feed for the textile industry. That unfortunately is the norm for the last three decades. Today it is cotton, tomorrow it will be another crop. My report, ‘Economy on a Roller Coaster’, documented growth trends over 1990-2015 and showed that one or the other crop shows high growth in one or two years, which gives agriculture sector growth rate a positive tinge; however, no crop has shown sustained growth beyond one or two years. In this respect, the hint towards investing in agriculture sector infrastructure is welcome; however, the fruits of such investment will ripen in the long term. In the short run, finding resources for such investments will be the main question.

Industrial sluggishness has been attributed to lack of competitiveness and fragmentation in the sector. The relevance of competitiveness emerges if an industrial base exists. Pakistan’s problem is that industries are shutting down and investors are shifting their capital in search of windfall gains from speculation in capital, property and commodity markets. This highly perverse anti-industry incentive structure of the macroeconomic and fiscal policy framework will need to be corrected before competitiveness issues are taken up. Fragmentation is also due to tax and labour welfare provisions, which will need to be addressed.

The finance minister has lamented the absence of FDI in industry. However, given the perverse anti-industry incentive structure of the macroeconomic and fiscal policy framework, it is not surprising that foreign investment has been flowing into the services sectors, rather than into industry. And expecting China to shift its industry to Pakistan is wishful thinking, given the high taxation, the decrepit infrastructure and poor technical skill endowment of the middle level labour force that is so crucial to industrial operations.

SME development is also erroneously tied exclusively to credit availability, ignoring all available empirical evidence that SMEs develop on the back of large-scale industry and need a package of credit, skill and marketing support.

Fundamentally, the finance minister’s statement has failed to address the basic question of how the budget and trade deficits will be covered. Acknowledging the need to fulfil the requirements of the 18th Amendment is not enough. Deep cuts in non-development expenditure are called for. The same is true of non-essential consumer imports if the yawning trade deficit is to be reined in. Will the state be on board?