Intro: The year 2015 has come to an end; now is the time to reminisce what we have lost, gained, anticipated, toiled for and ended up with.

Intro: The year 2015 has come to an end; now is the time to reminisce what we have lost, gained, anticipated, toiled for and ended up with.

On the international scene and at home, women have scaled new heights and have been honoured in their respective line-of-work.

As the year winds up, here's a flashback into the yearlong scores by women. You! highlights some of the women achievers of 2015...

In May, Moroccan Myriam Adnani became the first Muslim female pilot in Europe.

In August, Vassiliki Thanou, president of the country's Supreme Court, was sworn in as the first female prime minister in the history of Greece.

First ever female US Army Rangers

In August, Kristen Griest and Lt. Shaye Haver became the first female soldiers ever to graduate from Ranger School.

Most Powerful Arab Women for 2015

In September, Forbes named Nemat Shafik (the Deputy Governor of the Bank of England) and Naglaa Al-Ahwani (the Egyptian Minister) as the Most Powerful Arab Women for 2015.

In November, Iran appointed its first woman ambassador Marzieh Afkham to head its embassy in Malaysia.

German Chancellor Angela Merkel topped the Forbes list of the world's 100 most powerful women for the fifth consecutive year. Also, in December, Time magazine named her as 'Person of the Year 2015'.

In October, a Punjabi-origin barrister Bobbie Cheema-Grubb became the first Asian woman to become a high court judge in the UK.

Svetlana Alexievich, the Belarusian female writer whose oral histories have recorded thousands of individual voices to map the implosion of the Soviet Union, won the Nobel Prize for literature.

In May, a record of 8 Muslim women MPs were elected in general elections in Britain. The election included the first Muslim SNP MP, Tasmina Ahmed Sheikh, elected in the landslide by the nationalist party in Scotland as well as the first female Muslim Conservative MP Nusrat Ghani. 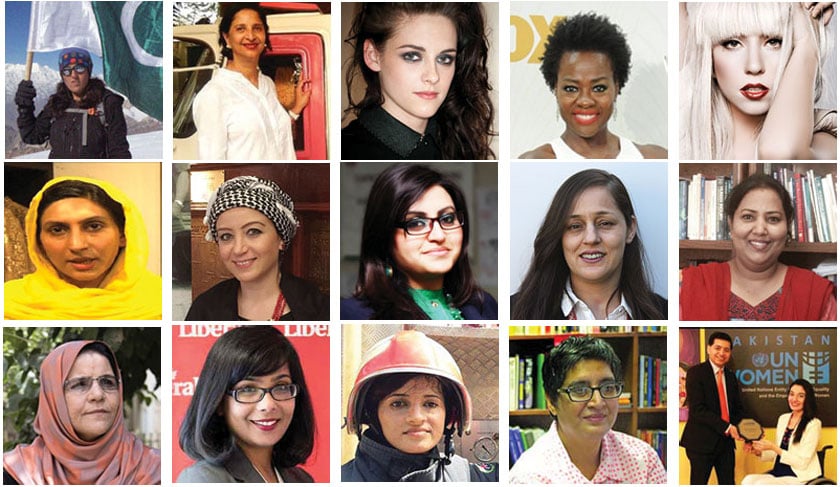 In October, Pakistan's first-ever delegation of women entrepreneurs have made history by visiting Sichuan Chamber of Commerce for footwear imports and exports in Chengdu.

In December, Pakistani activist Sabeen Mahmud was honoured by the global affairs magazine Foreign Policy in its annual list of 100 Leading Global Thinkers.

Shamim Akhtar, 53, from Rawalpindi set a new record and became the first ever female truck driver of Pakistan.

For the first time, an Additional Commissioner Punjab Revenue Authority (PRA) Ayesha Ranjha made her way to the limelight as she sealed out nearly 13 fashion outlets in Lahore for not paying General Sales Tax.

In August, Rahila Kanwal of Chitral became the first female lawyer from Chitral.

And the award goes to

In March, Gulalai Ismail, a 28-year-old Pakistani was awarded the 2015 Commonwealth Youth Award for Excellence in Development Work.

In March, Tabassum Adnan of Swat got international women of courage award in the US. She is the founder of Khwendo Jirga which is the first ever women-only Jirga.

BBC's broadcaster of the year award

Nosheen Lone from Pakistan won the Best Woman Award, for her remarkable discoveries in the field of technology, in a competition for female entrepreneurs held in the United Kingdom.

In December, Minister of State for Information Technology Anusha Rahman was awarded the 'GEM-TECH Global Achievers 2015' award by the ITU and UN Women in New York for initiating a number of projects and programmes that have had a profound impact on the ICT sector in Pakistan.

Pakistani environmentalist Zar Aslam  launched her own service exclusively for women passengers and drivers in Lahore. 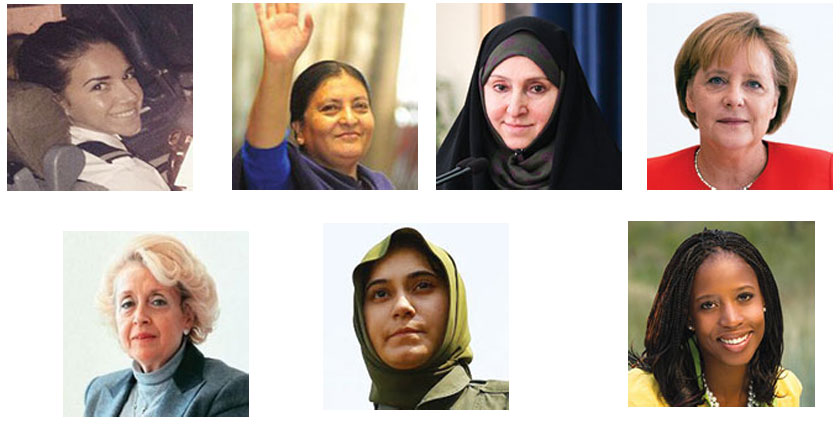 In February, Kristen Stewart became the first American woman to win a Cesar, France's equivalent of an Oscar. She was given the award at the 40th Annual Cesar Film Awards Ceremony in France.

Viola Davis made Emmy history when she won the award for best actress in a drama series, becoming the first black woman to take the honour in the prestigious category.

Billboard's woman of the year

In September, Lady Gaga was named woman of the year by music magazine Billboard.

Jennifer Lawrence topped the Forbes list for being the world's highest-paid actresses.

Woman of the Year

In September, Deepika won Woman of the Year at GQ awards - winning the title for the second time. She had earlier bagged the same title at IIFA Awards in June.

In November, Victoria Beckham was awarded Glamour Women of the Year Awards in New York.

In October, artist Shazia Sikandar glittered New York's Time Square with a new look by using her digital skill on the electric billboards all around Times Square.

Illustrated's 2015 'Sportsperson of the Year'

Serena Williams was named Sports Illustrated's 2015 'Sportsperson of the Year'. The first after three decades.

For the first time in the history of Afghanistan, a group of women climbed 16,000 feet up a mountain.

In July, Pakistan's first female professional footballer Almira Rafeeque made history by becoming the first sportswoman from the country to play the sport in United Kingdom.

Sportswomen of the Year Awards

Government honoured Ronak Lakhani with Tamgha-e-Imtiaz for her team's achievement at the Special Olympics Pakistan (SOP) in Los Angeles.

In January, Rihab Mahmood, a student at Wayne Hills High, won an honour for the project to aid students in Pakistan. The 18-year-old collected and donated a year's worth of school supplies for 65 elementary school students.

In July, a 17-year-old Pakistani Ayesha Memon received the highest marks in the world - 10,000 schools in 160 countries - in the Cambridge IGCSE mathematics examination.

Swati girl honoured in US

In September, a student of 8th grade hailing from Swat, Khyber Pakhtunkhwa, Hadiqa Bashir was awarded Mohammad Ali Humanitarian International Award in the United States for her struggle for minors and against forced marriages.

In October, Masooma Maryam Shigri got the Best Cadet award during the Passing Out parade. She is also the first female army commissioned officer from Shigar district, and Baltistan division.

For whom the bells tolled

In July, first English woman to be ordained in the Anglican Communion, the Revd Joyce Bennett, died.

Best-selling author Collins died of breast cancer. Throughout her career, Collins sold more than 500 million copies of her 32 novels.

Drench me in fall hues

The amazing women of Kalash

"I thought I’d be dead soon with stage IV cancer…"

Women who are rewiring the system