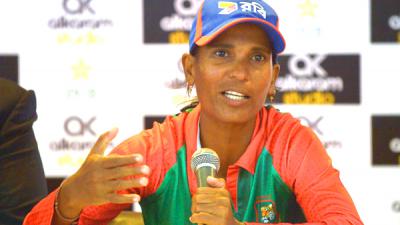 KARACHI: Bangladesh women's cricket captain Salma Khatun said Tuesday her players feel "comfortable" in Pakistan as they prepare for a series, even though most foreign teams have shunned the conflict-racked country for years.

The series, comprising two Twenty20s and as many one-day matches, was given the green light after a visit by a Bangladeshi security delegation.

Pakistan's international isolation was overcome earlier this year when Zimbabwe toured for a short limited-over series, but hopes for more cricket remain slim after a bomb went off outside the ground during the last match.

Pakistan hosted non-Test playing country Nepal in 2011 but the last high-profile teams to play in Pakistan were India and Sri Lanka in 2006.

Khatun said her team was focused on cricket.

"We are here to play cricket and are comfortable," she said at the launch of the series that will be played entirely in the southern city of Karachi.

"It is just like our home and we are fully prepared to play against Pakistan, which is a very strong team."

Bangladesh twice refused to send their men's team to Pakistan, in 2012 and 2013, over security fears after initially agreeing to play short limited-over series.

The Pakistan Cricket Board (PCB) has promised foolproof security for the Bangladeshi women's team, with players staying at the same club where they will play their matches.

Sarfaraz 'wants to have a body like Faf du Plessis', Shadab says ahead of Pak vs SA Test

'Bad conditions' to be blamed for my declining graph, says Yasir Shah