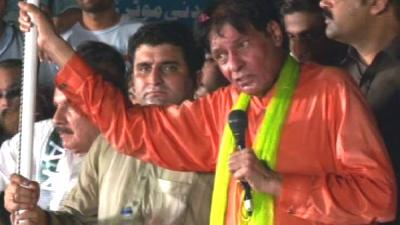 FAISALABAD: Chaudhry Sher Ali, the father of Federal Minister for Water and Power, Abid Sher Ali, has alleged that Punjab law minister Rana Sana Ullah is involved in as many as 20 murders in Faisalabad.

Chaudhry, while addressing a rally on Friday, claimed he has a text message of former CPO Faisalabad Dr. Sohail Tajik that confirms Rana Sana’s involvement in these murders.

“The text message was also shown to Prime Minister Nawaz Sharif who ordered Chief Minister Shahbaz Sharif to investigate into the matter however no action was taken against Rana Sana,” he said.

The veteran PML-N politician also demanded the government to ‘conduct an operation in Faisalabad to arrest the killers.’

Rana Sanaullah speaking to Geo News said that Ch Sher Ali is used to making rampant statements, however, "I will not take any legal action against him."

“I will raise the issue within the party,” he added.