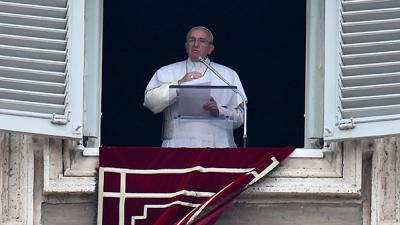 VATICAN CITY: Pope Francis on Sunday condemned two suicide attacks on churches in Pakistan and accused the world of "seeking to hide" the persecution of Christians.

"It´s with pain, much pain that I was told of the terrorist attacks against two Christian churches in Lahore in Pakistan, which have caused numerous deaths and injuries," the pope said after his weekly Angelus prayer in Rome.

Fourteen people were killed and more than 70 injured when two Taliban suicide bombers attacked the churches in the city of Lahore on Sunday.

Also read: 15 killed in two attacks on churches in Lahore

"I implore God... that this persecution against Christians -- that the world seeks to hide -- comes to an end and that there is peace," he added.

Pope Francis, spiritual leader of Roman Catholics worldwide, regularly condemns violence against Christians in Iraq and Syria and other regions, often at the hands of Islamist militants.

In the US, camera phones increasingly expose racism

Modi's lockdown plan led to 'devastation and misery' for the poor, claims analyst