‘Blocked contents’ of Pak-Qatar LNG contract to be shared with Senate: PM Abbasi 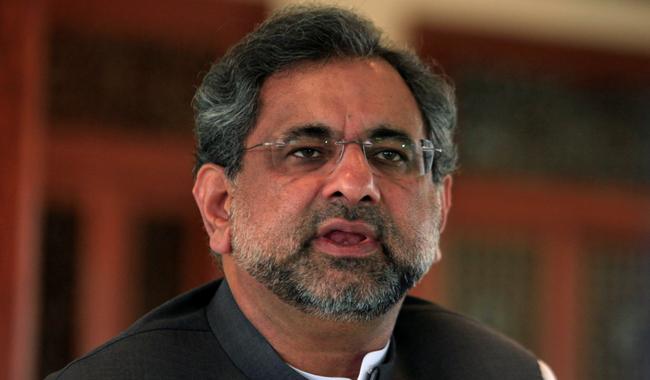 ISLAMABAD: Prime Minister Shahid Khaqan Abbasi Thursday assured the Senate that the government would share the hidden details of Pak-Qatar LNG contract if the members keep them secret.

The prime minister apprised the Senate that the Liquefied Natural Gas contract between Pakistan and Qatar was the world’s lowest cost that had had been signed ‘efficiently’ and within ‘least timeframe’ as an inevitable measure to cope with swelling energy crisis.

Briefing the Upper House on the details of the LNG contract, the prime minister said all of the relevant information regarding the contract was part of the Senate’s record and available on the website of the Pakistan State Oil (PSO).

However, he assured the House to apprise the members on the blocked contents of the agreement on the said website provided the members keep it secret. On Chairman Senate’s assurance, the prime minister agreed to provide the hidden contents of the contract to the House.

He told the Senate that the whole of the process had been signed under his supervision for what he was also responsible.

The prime minister told the House that it was the first-ever contract in which the clause of ‘re-negotiate’ had been inserted and that it took around 14 months to negotiate the agreement.

He said the government had floated a tender for five years and signed the 15-year contract after getting the price quotations and as per rules, the price slope would increase in accordance with the period of contract.

He told the House that no country was getting LNG on the rate, Pakistan had been availing.

He said in 2013, Pakistan had been suffering immense energy shortage forcing the closure of industry, power plants, CNG stations as well as the domestic supply. However, the incumbent government managed the supply of LNG-based gas within 20 months.

The prime minister told the Senate that the LNG import had benefited the national economy as currently all of the consumers including industry, CNG stations, power plants as well as the domestic ones were getting uninterrupted gas supply throughout the year.

He said LNG contract was a government-to-government engagement and the previous government too had initiated the process that could not yield any result.

He said Qatar was a premium supplier of the LNG and that even Japan had also been getting LNG on 14.5 to 15 percent of the barrel.

He said in the past, Pakistan had been importing one million tons fertilizers and contrarily, the country had exported around 0.7 million tons commodity this year.

He said owing to smooth gas supply, gas-based power plants were operating well and most efficient plants were being installed and generating power.

Rolls-Royce will cut at least 9,000 jobs