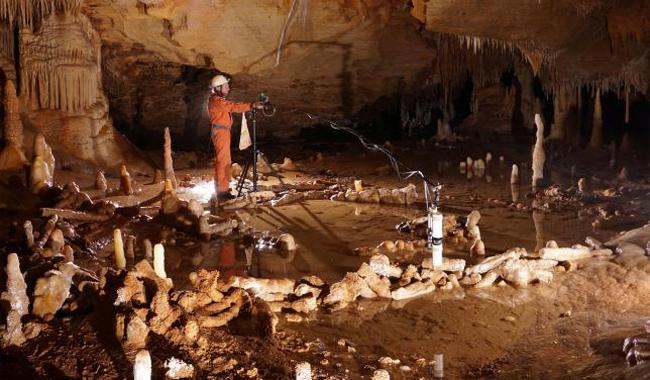 WASHINGTON: Mysterious ring-shaped structures fashioned about 176,000 years ago by Neanderthals using broken stalagmites deep inside a cave in southwestern France indicate that our closest extinct relatives were more adept than previously known.

Scientists on Wednesday described six rock structures discovered about 1,100 feet (336 meters) inside Bruniquel Cave in France's Aveyron region. While their purpose is unclear, they are among the oldest-known constructions by a human species.

The scientists attributed the work to Neanderthals, who thrived in Europe at the time but vanished roughly 40,000 years ago, after our species Homo sapiens, which first appeared in Africa about 200,000 years ago, trekked into Europe.

The six short-walled structures were built with pieces of stalagmites, rock formations made of mineral deposits from water dripping onto a cave floor. The two ring-shaped ones measured 22-by-15 feet (6.7-by-4.5 meters) and 7.2-by-6.9 feet (2.2-by-2.1 meters). All six had traces of fire.

The purpose of these structures built, as University of Bordeaux professor of prehistory Jacques Jaubert put it, in the "underworld" remains an enigma. Jaubert said the site probably was not a place to live or cook, so far from daylight.

"It could be for a specific domestic use or cultural one," Genty said.

The findings are more evidence that Neanderthals were not our dimwitted cousins, as they have long been portrayed. Other research indicates Neanderthals used complex hunting methods, spoken language, pigments for body painting, employed fire in a sophisticated way and performed burials.

Jaubert said there are other examples of Neanderthal structures like hearths and rock workshops, "but never the structures of this magnitude, and in this deep cave context."

"This is the work of a group of at least three to four people, and possibly more. All this indicates a structured society," Jaubert said.

There were some anatomical differences between the two species, with the bodies of Neanderthals shorter and stockier and they had larger brows and larger noses.