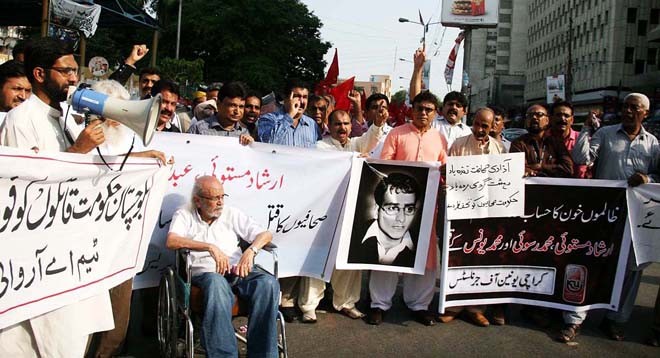 The killing of Irshad Mastoi, a trade unionist and a professional journalist, along with a trainee reporter Abdur Rasool and his office accountant Mohammad Younus on August 28 has further shaken the media in Balochistan.

According to eye witnesses, a person armed with 9mm pistol stormed into the office of the bureau chief of Online News and opened fire at Mastoi at point-blank range and then shot others, probably to destroy the evidence.

Both Mastoi and his accountant were killed on the spot while the trainee reporter succumbed to his injuries on his way to hospital after 45 minutes.

"Call data recovered from the reporter’s mobile shows he called someone at 8:10 or 8:20, roughly 40 minutes after the crime was committed," says a police official on condition of anonymity.

Mastoi’s close friends, colleagues and family knew that he had been receiving threats from sectarian organisations, banned Lashkar-e-Jhangvi, Baloch militant groups and security agencies over his reportage.

"He had been receiving life threats from unknown callers, who used abusive language and warned him of dire consequences," one of his friends told The News on Sunday. "Irshad [Mastoi] told me a couple of days before his murder that someone is threatening him on phone for the last few days but did not mention the details," he says.

Twenty four journalists, three of their family members and a media worker have been killed during the last six years. Baloch militant organisations have claimed the responsibility for the killings of six media men, dubbing them as agents of spy agencies. No one, so far, has claimed the rest of the murders, including that of Irshad Mastoi and his colleagues.

It is the third time that the local journalists in the wake of threats by a tribal notable stopped reporting for their TV channels/newspapers after closing down their press club.

Some of his colleagues think that Irshad Mastoi’s recent article on the eve of Baloch leader Nawab Akbar Bugti’s 8th death anniversary became the cause of his murder. He wrote about the life and politics of Baloch leaders and policies of the military establishment in Balochistan besides the military action in which Nawab Bugti was killed. However, some of his close friends suspect the involvement of a politico-sectarian party in his killing for not running the party’s press releases/statements on Online.

Irshad Mastoi, 35, a literary person, father of three children all under four years of age, was the general secretary of Balochistan Union of Journalists, and raised voice for the plight of media people, particularly those murdered or killed in bomb blasts. He maintained the list of targeted journalists and would often jokingly say that he may one day be mentioned among them - today, he ranks 23rd on that list.

Mastoi had a hair-breadth escape five years back in an accident in Gwadar.

He was in a hotel room in Gwadar in December 2009 to cover the signing ceremony of the 7th NFC award. He received severe electric shock when his hand came close to a live high tension wire running close to the window while throwing cigarette outside the window.

He survived but his right hand was amputated in a Karachi hospital. He remained depressed for a couple of months, but with great effort he started writing and typing with left hand. He wished to get a bionic arm that costs over Rs3 million and made huge effort to get aid from any international or national organisation but could not succeed. "It is my great desire that I get a bionic arm so that my useless (amputated) hand can become useful," he often said to his friends.

The journalist community, which is in protest against the murder of their fellow journalist, does not have any expectation from the police that has failed to nab the killers of their own 22 police officers who fell prey to sectarian violence in the province. FIRs of murders of media people are hardly ever registered and not a single culprit has been arrested.

The compensation for the bereaved families in most cases is pending for years.

There is no freedom of press in Balochistan. The banned organisations whether Baloch or Islamic/sectarian militants, politico-sectarian groups and intelligence agencies want to take over the media. These organisations get space on front page in the local newspapers for their routine press statements and air time in TV channels.

Similarly, the restive districts including Kohlu, Kechh, Khuzdar and Dera Bugti are in control of security forces which also do not allow objective reporting to journalists. Khuzdar Press Club was closed down two months back and it is the third time that the local journalists in the wake of threats by a tribal notable stopped reporting for their TV channels/newspapers after closing down their press club.