Tea is the world’s most popular drink (after water) so it’s not surprising that there are so many types to choose from! In the 17th century, tea was enjoyed mainly by women.

Tea is the world’s most popular drink (after water) so it’s not surprising that there are so many types to choose from! In the 17th century, tea was enjoyed mainly by women. Whilst men socialized in coffee houses, ladies would invite friends round for afternoon tea, and would brew their loose tea leaves in boiling hot water. 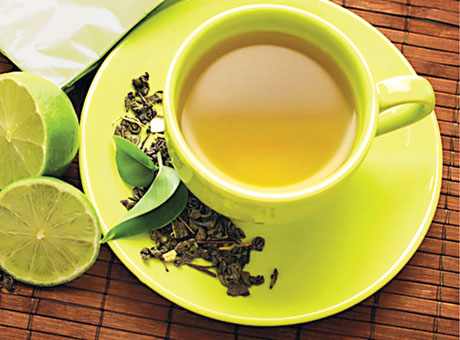 Winter is coming, and with it comes extra kilos, flu and chilly evenings. It is tempting to laze around in your bed, wrapped in a blanket, and give into the temptation of hot chocolate, coffee or chai. We tend to put on extra kilos in winters since we tend to lay off our outdoor sweat session and would rather curl up in bed with a book in hand.

Incorporating green tea in your daily diet helps you get a lasting source of natural energy full of antioxidants. Among the different types of tea, green tea is one of the richest natural sources of antioxidants. Not only is it a good source of energy but a reliable source of proper hydration in winters. While we usually opt for hot beverages as a way for hydration in winters and are likely to end up drinking a cup of coffee, we need to keep in mind that such drinks are diuretic and high in calories.

Green tea is a calorie free drink which helps you feel fuller, and in turn helps you avoid those high-calorie drinks that you are better off without in the first place. Green tea can help you lay off those pantry raids and be thankful for it by the end of the winter. It keeps your body hydrated without getting too much sugar in your system.

For many years in ancient China, tea was a costly drink, consumed only by royalty and the wealthy. However, following the fall of the Mongolian Empire back in 1368 AD, the whole population of China began to experience the wonderful consumption of tea, including the much-prized green tea.

In the early 1400s BC, Chinese seamen roamed the seas and took with them their green tea to ward off the illnesses that plagued European sailors, such as scurvy. This amazing tea became a trade-good eventually, sought after for its delicate taste and health giving benefits, and found its way around the world.

It was however, during the Ming Dynasty that the drinking of tea became more than simply a royal or higher class activity. The Ming Dynasty lasted from 14th through the 17th century AD and accounted for a great deal of development and innovation in the growing and brewing of tea.

Modern research has suggested that this type of tea has a lot of health benefits including antioxidants and lower levels of caffeine. Indeed, the Chinese have been using tea for its health benefits for centuries. It has been used to improve mental sharpness and it has helped with circulation.

Weight loss: First things first, green tea contains properties that can help to increase your metabolic rate and burn fat in a short time. This means that, together with a healthy diet and an active lifestyle, green tea can help you try and lose weight. If you swap sugary and fizzy drinks for hot or iced green tea, you can save thousands of calories a year!

Protects heart: A study found that one of the active compounds in green tea is as effective as aspirin in keeping blood platelets from clumping together. This results in improving the circulation and may prevent hardening of the arteries. Drinking green tea regularly helps protect the heart against a range of medical conditions including heart attacks and strokes.

Wards off depression: The green brew can also have a calming effect on your mind. Theanine is an amino acid naturally found in tea leaves. It is this substance that is thought to provide a relaxing and tranquilizing effect and is beneficial for tea drinkers. According to researchers, theanine also helps reduce anxiety.

Skincare: Green tea can also help with wrinkles and signs of ageing. This is because of their antioxidant and anti-inflammatory activities. Recent studies have demonstrated that green tea applied topically can reduce sun damage.

Stops tooth decay: The compounds contained in green tea kill bacteria found in the mouth, stopping them from attacking your teeth. In this way, green tea helps prevent cavities and gum disease, as well as decreasing the chances of inflammation.

Savour your green tea in style:

Green tea comes in different forms such as powder, leaves and tea bags. Tea bags were first invented in 1908. When tea bags were originally invented over 100 years ago they were made from silk. This quickly changed to paper and when tea became really popular in the late 20th century companies started to change the shape and overall look of their tea bags. Today, most people find it much easier and more convenient to buy tea bags. Tea bags come in all shapes and sizes today. Pyramids and circles are both tea bag shapes you can find on the supermarket shelf.

You can spice up your green tea game by traditional tea go-withs: cardamom, honey, cinnamon, mint or lemon. If you are someone who always finds him/herself running on a tight schedule then it would be wise to stock up your kitchen with Lipton green tea bags since they come with on-the-go tea bags. They come in different flavours which will ensure you don’t get bored easily and keep your morning ritual on point.

Although green tea helps speed up the metabolism, but this by no extent means one can consume 3000 calories and expect green tea to do wonders. A healthy metabolism is a process which requires consistency with food and exercise. Think of green tea as a supplement for your daily fitness goals.