Since the end of July, we had been waiting for the engineered clash between Ali Azmat and Umair Jaswal, funded by Red Bull, to unravel onstage. Though the leaked videos were not organic, this orchestrated clash, when it finally happened, was not so much a quarrel of the titans but a victory for music and a reminder that music can, at least momentarily, drown out our collective fears, anxieties and create an atmosphere of fun, frolic and love.

The clash show gave music fans plenty to talk about while the performers, Umair Jaswal and Ali Azmat, eventually embraced on stage and even sang a song together. Ahmed Ali Butt played MC to the evening and music icons like Mekaal Hasan, Faraz Anwar, Omran Shafique, Gumby showcased their verve onstage.

Since the end of July, we had been waiting for the engineered clash between Ali Azmat and Umair Jaswal, funded by Red Bull, to unravel onstage. Though the leaked videos were not organic, this orchestrated clash, when it finally happened, was not so much a quarrel of the titans but a victory for music and a reminder that music can, at least momentarily, drown out our collective fears, anxieties and create an atmosphere of fun, frolic and love.

Our story begins at the Expo Centre, which went through a striking alteration of sorts. Two separate stages were created, one on each end of the hall while a platform in the middle was also erected for host Ahmed Ali Butt whose sense of humour and musical background meant he made for the perfect MC for such an evening. And with two stages on each end, the audience could move freely from one end to another. 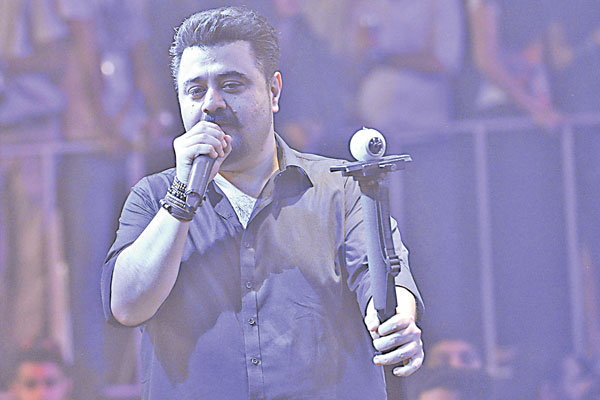 While the audience filled up the space to capacity and were eager and ready to cheer, Faisal Baig entertained with his spinning ways on the turntable until the show finally began. Meanwhile backstage, artists who were slated to take the stage were chilling out, waiting for things to kick off. I asked Umair Jaswal how he was feeling going up against Pakistan’s original rock god and Jaswal answered with a smile: “Ali is my idol”. Actor and producer Humayun Saeed, who also attended this shindig to support the cause of music, told Instep that he was backing both artists and had attended Ali Azmat gigs back in the old days as well when concerts were frequent. Junaid Khan also echoed a similar sentiment and was there to support both acts.

Of course, nothing had prepared fans because once the clash show began, it just got louder, groovier and by the end of it, people had let go of any reservations and were dancing to the sounds of music without hesitation and fear. 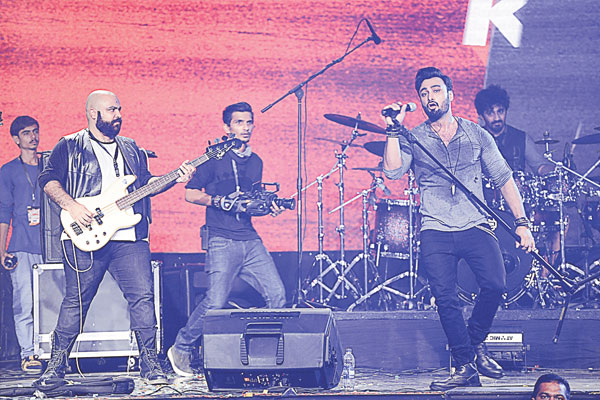 The proceedings began with a drumming duel as Gumby (who is a part of Ali Azmat’s line-up) and Aahad Niyani (a part of Umair Jaswal’s line-up) gave the audience a thumping percussive beginning. Several fans were also chanting Gumby’s name because, well, there is no one better at this than him in the music business.

The format of the show was also striking in the sense that it was divided into four rounds which meant that no act played more music than the other. While Azmat, who has been around for over two decades, played songs that so many in the audience knew by heart and were familiar with, the same cannot be said for Umair Jaswal whose biggest hits have come from Coke Studio. However and this is a big one, Jaswal has enormous stage presence and a fan following that is evolving nicely, the kind that has penetrated the minds of young people who see him as a representation of their own generation. 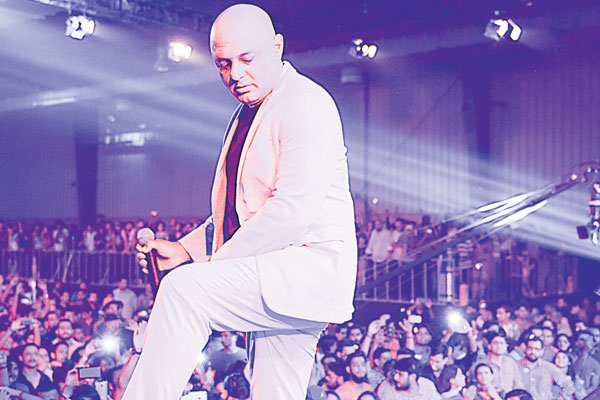 Moving on, during the cover round, Azmat before playing Aaroh’s ‘Raag Neela’ dedicated the song to the memory of the late Haider Hashmi who passed in 2014 and spoke passionately about how the 40-year-old guitarist Hashmi had worked with him on several songs.

While Azmat played ‘Raag Neela’, Jaswal’s cover of ‘Baybia’ by Sajjad Ali was also entertaining. And as the night went ahead, Ali Azmat showed off just why he’s like no other performer. In between songs, he was dancing, doing disco moves, modulating his voice to pass a cheeky remark while his band members such as Gumby, Omran Shafique and Kamran ‘Mannu’ Zafar were creating rock music magic, like they always do. They are the best in the business and the stage loves them almost as much as it loves Azmat.

Jaswal accompanied by new-age musicians like Ali Suhail and Rahail Siddiqui also had a rollicking time since both Suhail and Siddique as well as the others gave Jaswal a backbone that could withstand the magic coming from the other side.

In addition, the wild card round introduced two more musical stalwarts to the night as guitar god Mekaal Hasan, often referred to as ‘Mahraaj’ by friends and industry insiders, played two tunes with Ali Azmat, while Faraz Anwar, another hero to and from the music world, did the same for Umair Jaswal.

The most powerful moment of the night came when Azmat took to the mike and invited Jaswal to join him on stage and openly admitted that it took courage to stand up to someone like him. Jaswal got a bear hug from Azmat before both of them joined hands to sing the patriotic number, ‘Jazba Junoon’.

While there are those who question the very idea behind this ‘clash’, it was less about hostility and competition and more about music itself and what happens when an event is designed specifically to cater to music fans. It wasn’t a variety show, it wasn’t lip-synced but live, energetic and ultimately, healthy for not just the music community but also those who love music in entirety and have no other outlet to see music industry giants like Omran Shafique, Mekaal Hasan, Gumby, Faraz Anwar, Ali Azmat as well as the younger heroes of modern music such as Umair Jaswal and crew.

All in all, a victorious night for LIVE music.