Needless to say that education statistics in Pakistan are a dismal sight to look at. According to a recent report by Pakistan Data Portal, almost 47% of the 50.8 million children in Pakistan are deprived of even the most basic form of education.

The documentary on Sister Zeph’s fight for education was honoured with a gold medal at the New York Festivals, 2016.

Needless to say that education statistics in Pakistan are a dismal sight to look at. According to a recent report by Pakistan Data Portal, almost 47% of the 50.8 million children in Pakistan are deprived of even the most basic form of education. Hence, it becomes all the more important to speak on the issue. Shehzad Hameed’s Flight of the Falcons does just that.

The film follows the story of Sister Zeph and her tireless efforts of providing education to the girls in her town of Gujranwala. The 48-minute documentary is an inspiring depiction of Sister Zeph’s constant struggle against the status quo, against religious discrimination and against hackneyed mindsets. Her only aim is to encourage families to educate their girls in her free school and make them capable enough to stand their own ground. It’s a simple story but one that is thought-provoking in how even the most unassuming are defying stereotypes and making a difference in whatever little resources they have.

However, to scour for these covert activists is no easy feat. And to convince them to shed off their cloak of modesty and come into the limelight is even more difficult. Hameed faced a similar challenge when he first approached Sister Zeph aka Riffat Arif and landed at her free education center to film her story. 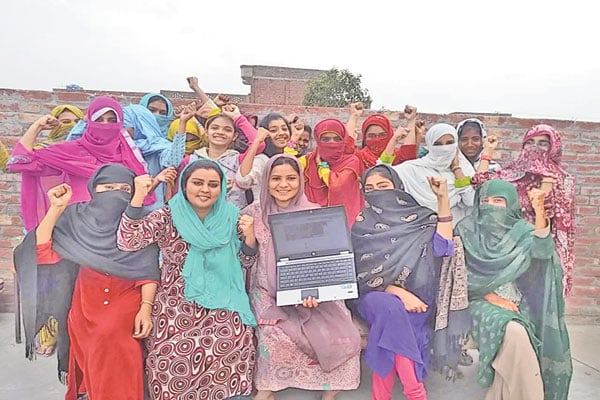 Flight of the Falcons is based on Sister Zeph’s fight for girls’ education.

“I was filming with kids and girls to be precise and they were very aware of my presence in their surroundings in the initial days. Some simply refused to speak to me since I was the first outside man they were interacting with. I had to spend considerable time with them without the camera to make them feel at home, draw paintings with them, eat food with them so they could get comfortable with the crew and myself. Once that objective was achieved, I was easily able to capture their raw emotions through a fly-on-the-wall approach,” he shared with Instep. “There are documentary directors who like to direct their main characters a lot which I feel looks scripted and inorganic. I, on the other hand, knew that kids can come up with amazing responses once they are comfortable. And any amount of direction will not be able to do justice with the subject at hand. Every documentary is a different beast and this one was no different. I tried to keep it as organic as I could.”

Hameed got involved in the project after his last documentary, The Pakistan Four, was criticized for not highlighting the contributions of women living inside Pakistan, even though it was lauded by audiences world over and won the Best Documentary Award at the Indiana Short Film Festival in 2014. After extensive research, Hameed stumbled upon Zephaniah Free Education Centre’s Facebook page and decided to merge the narratives of both education and women empowerment to throw light on a homegrown Pakistani woman’s fight for girls’ education in the most unfavourable of settings. And, it seems, he has succeeded in achieving his purpose. Not only is the documentary moving and modestly charming, evoking a sense of activism in the viewer, it also ended up being a source of national pride when it won the Best Documentary Award: Community Portraits at the New York Festivals, earlier this year. The response from the West, Hameed says, has been remarkable.

“The reaction from international audiences has blown me away. One particular email I received from a girl in South Africa was very special. She was a cerebral palsy patient who told me she felt thankful to God for having the opportunities to have education after watching Flight Of The Falcons. And she went on to donate money to the school,” Hameed added.

More importantly, the documentary has helped further the cause. Initially cramped up in a one-room, worn-out house, the education centre has now expanded into a proper building with separate rooms for various activity-based and language courses. But while Hameed has been rewarded for his work, filming, funding and consolidating the documentary, like most other journalistic documentaries, was a challenging experience. Hameed knocked on many doors but the only production house that agreed to finance the project was an international one – Infocus Asia Singapore alongside Mediacorp Pvt. Limited. It is unfortunate that filmmakers documenting and recognizing these unsung heroes somehow fade away in the background themselves. Over the years, Hameed has made more than a handful of documentaries and though his works go onto become a global sensation, little is known about them in Pakistan. Hameed feels it’s because we are stuck in a puddle of mediocrity.

“Run of the mill, rating-driven content is the order of the day in Pakistan. I worked with Pakistan’s first English language news channel pretty early in my career but it closed down since we were aiming for quality and research-based TV content, instead of solely focusing on ratings. Similarly, finding funding for documentaries from within Pakistan has gained no traction, despite filmmakers winning awards across the globe. These two elements are what help mature content develop,” Hameed asserted.

One hopes that films like these that challenge West’s idea of Pakistan and resonate a positive image that the country has been longing for get their due recognition. For now, the full documentary is available on YouTube and deserves a watch.