When the news of Grease’ return spread across Karachi’s social circuit, the one question that emerged on everyone’s mind was this: why the comeback? In an earlier interview with Instep, director, and founder of Made for Stage Productions (MSP),

When the news of Grease’ return spread across Karachi’s social circuit, the one question that emerged on everyone’s mind was this: why the comeback? In an earlier interview with Instep, director, and founder of Made for Stage Productions (MSP), Nida Butt reasoned that demand has been such, which is quite evident in the fact that almost all shows have been sold out so far. This Thursday’s showcase was no different either; it was house full. However, there is more to the comeback than just that. The return also marks MSP’s 10th anniversary for there couldn’t have been a better way to celebrate the occasion than with the reincarnation of the team’s all-time favourite piece of work.

And reincarnation it sure is because apart from a handful of stars including lead actor Ahmad Ali and Zubair Tariq, almost all of the cast is new. Seerat Jaffri takes on the role of Sandy, which was originally played by Ayesha Omar, while singer Natasha Humera Ejaz replaces Sanam Saeed in the role of Rizzo. The script remains essentially the same – bringing the 1978 American classic, featuring John Travolta and Olivia Newton-John, about young love, friendships and teen woes, back to life on stage. One thing’s for sure: the infectious, energetic songs, replayed with musical flair by a live house band, crisply directed by musician Hamza Jaffri, will not make one forget the original film anytime soon. That said, the comeback version of this iconic production is a mixed bag of hits and misses. 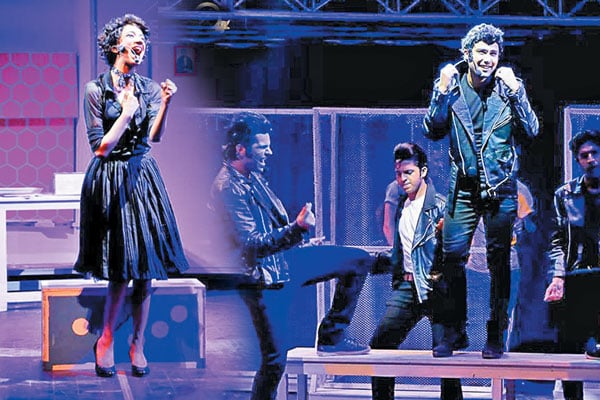 Singer Natasha Humera Ejaz (left) steals the show in the second coming of Grease - The Musical, whereas Ahmad Ali stays committed to his character’s defining points and delivers a commendable performance, once again.

Just like a film, one usually sticks around till the end for a play. With Grease, however, it means two hours of song and dance, fun and laughter infiltrated by some unwelcome, long-dragged, yawn-inducing moments – courtesy of lead actress Jaffri. Jaffri is the weakest link of the play. One has a numbing sense every time she comes on stage that she is only doing what she has been directed to do, without making much of an effort to make the part her own. This comes as a complete surprise especially because she showed a lot of potential during the rehearsals. She fails to exude Sandy’s white-bread innocence that is meant to complement Danny Zuko’s leather-clad machismo. The latter is depicted impeccably by Ahmad Ali, who reprises his role from the original. Ahmad has some decent gags up his sleeves as the smoldering T-bird leader. His abrupt coughs and quintessential Travolta walk force one to burst into fits of laughter, almost instantly. In fact, his solo performance is one of the best  in the long list of solos and is timed perfectly offering the audience a much-welcome comic relief.

The real star of the show, however, is Ejaz. She really gets into the skin of Rizzo’s character and gives momentum to the play at points where it seems to be drifting towards dullness. She is unabashedly feisty, a relatable rebel and offers the most compelling solo of the entire production. Also notable for their strong presence are Iman Shahid as Marty and Amtul Baweja as the obnoxious, larger-than-life Jan, who is a sheer treat to watch.

Despite a patchy performance by the lead actress and a couple of technical glitches  that make some dialogues and songs sound more like mumbles, Grease is no doubt an entertaining and engaging watch, albeit a tad bit long. The play can easily be sharpened by slashing a couple of less-compelling, unnecessary solos.

Three cheers for the choreography, which is lively, fun and fascinating matched, in equal measure, by some raunchy performances by the members of the T-birds and Patty Simcox. And while none of the cast members stray from the beats or flub dialogues, the only visible flaw, which makes some of them come acrossas misfits in the era they are defining, is execution of the accent. Not all of them are on point with their American drawl and seem to be switching between British to American to even desi Pakistani English accent. Barring that, the inter-changing sets are commendable and so is the styling. Butt does a decent job in directing fresh, young talent and bringing out the best in them but once again, can benefit more from a better leading lady.

– The play will continue to run at the Arts Council  till April 11.

The Gospel of Meesha Shafi