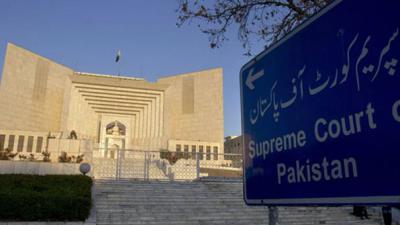 ISLAMABAD: The Supreme Court on Tuesday maintained an earlier decision by the Lahore High Court (LHC) restricting the media from broadcasting or publishing the photos, speeches or political activities of Muttahida Qaumi Movement (MQM) Altaf Hussain.

The MQM chief had challenged LHC decision in the apex court. The appeal, filed by Hussain's lawyer Asma Jahangir, argued that the LHC decision violates freedom of expression, basic rights and the Constitution and pleaded the Supreme Court to declare it null and void.

During the hearing of the case today, the Additional Attorney General informed the Supreme Court that a similar appeal against ban on media coverage of Altaf Hussain was being heard in the Lahore High Court.

On this, the apex court disposed of the appeal and sent the matter back to the LHC, stating that high court would decide whether or not to uphold the order in this regard.

On September 07, the LHC issued orders restricting Pakistani television channels and newspapers from broadcasting or publishing speeches, statements, photos or activities of the MQM chief.

The LHC also issued instructions to the Pakistan Electronic Media Regulatory Authority (PEMRA) in this regard.