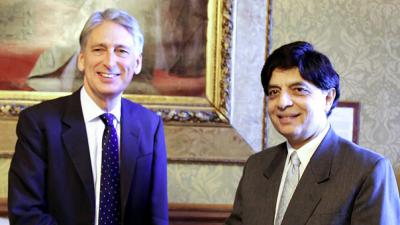 Pakistan’s High Commissioner to UK and senior UK officials were also present during the meeting.

Nisar told Hammond that Pakistan and UK share their foreign policy on many fronts, and Islamabad gives utmost importance to its relations with London.

The interior minister said that Pakistani government and its defence institutions paved the way for peace talks in Afghanistan but unfortunately international community’s response was not positive in this regard.

He said India was sabotaging efforts for peace on ever-changing pretexts, putting regional security at stake.

According to a statement issued by Interior Ministry, the UK foreign minister agreed with Chaudhry Nisar Ali Khan and applauded Pakistan’s role for dialogue process in Afghanistan.

He also expressed concerns over cancellation of talks between India and Pakistan.