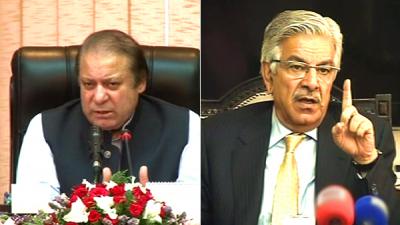 ISLAMABAD: Prime Minister Nawaz Sharif has expressed his concerns over unprovoked firing by Indian troops along the Working Boundary.

He also expressed his condolence over the loss of lives by the Indian firing.

The PM has directed the Foreign Office as well as Defence authorities to take up the matter with their counterparts.

Meanwhile, Adviser to the Prime Minister on National Security and Foreign Affairs has urged India to stop ceasefire violations forthwith and restore peace and tranquility at the Line of Control and the Working Boundary.

In a statement, he expressed the extreme concern of the government of Pakistan at the continued ceasefire violations by India.

He also conveyed his heartfelt condolences to the bereaved families and prayed for the quick recovery of the injured.

There is no space for a limited war: Khawaja Asif

Defence Minister Khawaja Asif tweeted this evening that, “There is no space for a limited war.”

He added, “Any attack on us will depend on Pakistan's choice of response and timing.”