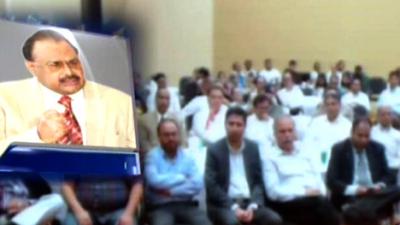 DALLAS: Muttahida Qaumi Movement (MQM) Chief Altaf Hussain has asked his party workers to stage protests in front of United Nations, White House and NATO and raise a demand for sending their troops to Karachi.

Altaf Hussain was addressing MQM’s Annual Convention in the US city of Dallas via telephone.

Altaf said, India itself is a coward country, if it had some honor it would not have allowed 'bloodshed of Mohajirs' on Pakistani soil. He reiterated the demand for a separate province for Mohajirs.

MQM Chief directed party workers to write letters to US newspapers and make them aware of the actual situation in Pakistan.

Altaf Hussain asked MQM workers to continue their movement for respectable life of mothers, sisters and daughters even if he was murdered.

He dismissed money laundering charges and said all the bank accounts in London had been frozen and the party members were dealing with a difficult situation there.

Terrorism is biggest threat for Pakistan, he asserted, claiming that the organizations banned by the Interior Ministry were still operating in the country.