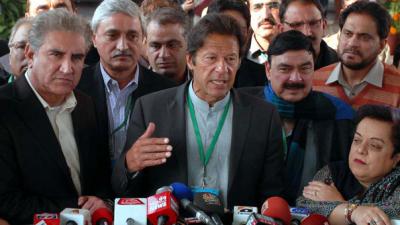 ISLAMABAD: The Pakistan Tehreek-e-Insaf (PTI) on Thursday submitted a written application to the Supreme Court on Thursday to obtain a copy of the detailed final report of the inquiry commission investigating rigging in the 2013 General Elections.

The application, a copy of which is available with Geo News, requests that "a copy of the complete final report of the Commission as submitted to the Federal Government (which under the Ordinance is a public document) may kindly be furnished to the undersigned on an urgent basis."

The application has been submitted by the PTI's counsel Hamid Ahmed and has been addressed to the Secretary of the Inquiry Comission, Muhammad Hamid Ali.

According to well-informed sources, the three-judge inquiry commission has rejected all three allegations leveled by the Pakistan Tehreek-e-Insaf (PTI) regarding systematic electoral rigging in the 2013 polls.

The commission was formed after long-running protests by the PTI last year paralyzed the federal capital and forced the Pakistan Muslim League-Nawaz (PML-N) government to agree on forming a commission for a judicial inquiry into the PTI's complaints of rigging and mass electoral irregularities.

The three main allegations of the PTI included organised rigging in the 2013 general elections, non-transparent polling and theft of the public mandate.

But the detailed report by the commission has rejected the allegations, saying there were irregularities to the extent of the Election Commission but they did not constitute a reflection of a deviation from the public mandate.

WHO 'praises' Pakistan's response against coronavirus