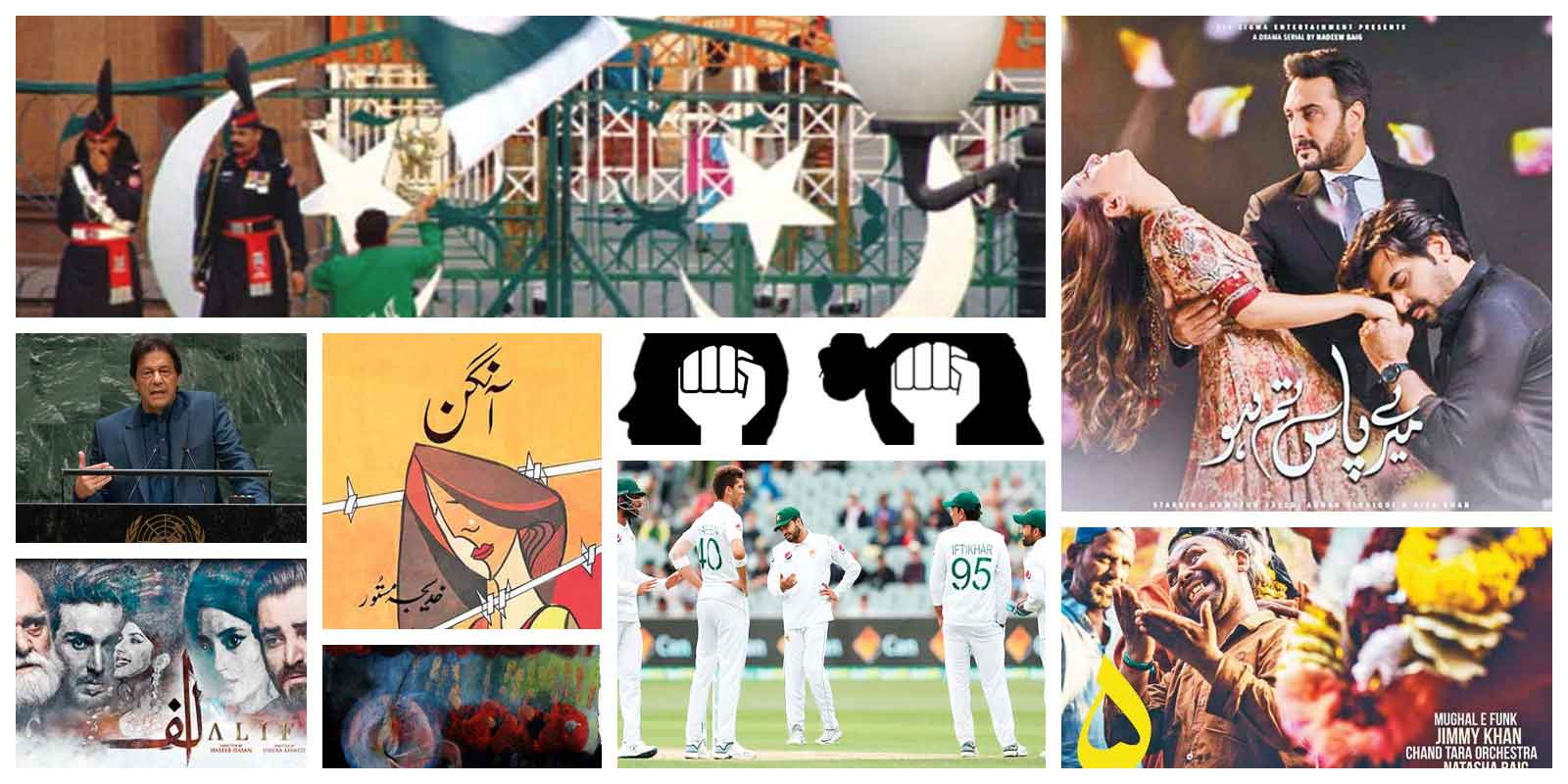 If you want a roundup of the year 2019, then you have come to the right place. Here is a motley of issues that came to pass in 2019 — let it be political upheavals climate change, goof-ups by political leaders or the best that Pakistani music and entertainment industry had to offer.

The year also garnered limelight due to hike in female movements around the world.

Not only that, fashion also had its moments this year, as did music.

Let us take a comprehensive look at the events that transpired this year.

A year in books

As 2019 draws to a close, TNS reached out to some of it's favourite authors to tell them about the books they read and loved this year and would like to recommend to readers. Here, in alphabetical order, is what they had to say.

Curbs on media in 2019: A silence envelops Pakistan

During the year the PTI government made several moves aimed at curbing both free speech and reining in of media as a means of diverting attention from its governance failures.

Here's an analysis of the year along with comments from a senior journalist and director Human Rights Commission of Pakistan.

When prominent members of Pakistani media came forward with their experiences, something broke.

No more could we say that harassment was a ‘western’ issue. Those naming and named were known, cared for and loved by us.

Since then, we have been broken, grappling with just understanding sexual violence, its consequences, punishment and procedure.

Most anticipated Pakistani films of 2020

With multiple films announced and scheduled to release next year, it certainly means that 2020 will be a bigger year for cinema.

With the New Year just a few days away, Instep takes a look at five of the most promising films that will hit cinemas in 2020.

Though 2019 isn’t over yet, it certainly is in its final innings. And like every year, it is time to reflect on the year that is going by and what trends, if any, emerged.

There are always unknowns, wild cards that could release by the year’s end.

But that’s few and far in between.

A to Z of entertainment

It’s not been the best of years, but it hasn’t been the worst of times either.

The year 2019 can be best described as ho-hum, where films took a dip in their state of rising and television more or less reprised its role as entertainment royalty but without any monumental elevations in value. There are productions and there are people, however, who kept pushing to raise the bar, impressing with their talent or vision.

Here’s a look at everything and everyone who we’ll remember 2019 for; the A to Z of entertainment in the year that was.

The intellectual community of Pakistan is a hard breed to impress; they will criticize the most successful drama serial and write off an actor on the basis of his or her off-screen activities.

However, they will stand united on one front - reading books - even those that are related to the field of entertainment.

Five books in 2019 came out as bestsellers. You might not agree with the list but the truth is, without these books, the outgoing year wouldn’t seem complete. And if you haven’t already, then you definitely catch up on reading them in 2020. Happy reading!

Looking back at 2018, one realizes that the major highlight of the year in television was the multiple social themes explored.

There was nothing wrong with that, given that we were finally speaking up about topics that had been considered a taboo since forever.

The trend continued in 2019 and the number of socially relevant dramas only increased; sensitive issues such as acid attacks, child abuse, domestic violence, dual personality disorders, sexual assault and abuse and workplace harassment dominated the small screen this year.

When prominent members of Pakistani media came forward with their experiences, something broke.

No more could we say that harassment was a ‘western’ issue. Those naming and named were known, cared for and loved by us.

Since then, we have been broken, grappling with just understanding sexual violence, its consequences, punishment and procedure.

As 2019 ends we are still not unified in our stance towards harassment. While there is unprecedented dialogue, it is engulfed in power projection, silence and vested interests.

The last sun of 2019 will set the day after tomorrow, taking along all the good and bad memories that must have taught us many things and will certainly help us in turning the new year into a more fruitful one.

Pakistan cricket team ended the year by winning at Test against Sri Lanka in Karachi, the second of a series that marked the return of Test cricket to the country.

In 2019, a peace-seeking Pakistan was caught off-guard on the Indian front.

Having seen itself as triumphantly concluding the Balakot episode, Islamabad mistakenly believed that the second-term BJP government would be ready to diplomatically engage with Pakistan.

Instead, India had planned to throw the gauntlet. As the year unfolded, the bitter truth unraveled. India was facilitated in its aggressive and brash plans by many Pakistan had considered its friends.

Education and youth in Pakistan

When the PTI assumed power in 2018, the youth had played a decisive role in its electoral success.

The youth had hoped that the coming year would be the year of change for them; but sadly by the end of 2019 there have only been promises, prompting a large number of youth to come out and stage marches in various cities of Pakistan.

The end of another year approaches.

As newspaper columnists we tend to do three things as we write a year-end article.

First, of course, we thank Providence for letting us be around for another year.

Second, we try and put in one place the happenings that we found most interesting or alarming over the last year or so. Finally, we try to make some predictions or give advice about what to do as another year comes upon us.

Editors at The News on Sunday encapsulated the year in their beautiful verses.

The poems give a somewhat  holistic view of the events that passed by us in 2019.

Take a look at the year review in poems.