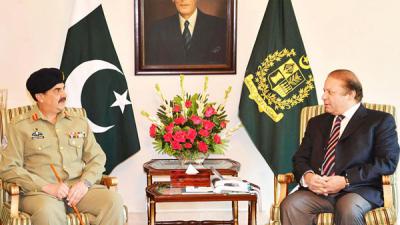 ISLAMABAD: Chief of Army Staff (COAS) General Raheel Sharif held a meeting with Prime Minister Nawaz Sharif in Islamabad on Tuesday and discussed internal and external security situation of the country in addition to discussing progress of Operation Zarb-e-Azb.

It was decided that operation against criminals and terrorists will continue unhindered across the country to optimally utilise the environment created due to phenomenal successes of Operation Zarb-e-Azb.

It was reiterated that the operation would be taken to its logical conclusion, regardless of the cost, and terrorists and criminals would be hunted down indiscriminately.

The PM, while lauding the gains of the operation in FATA, said “the nation is proud of its valiant armed forces and highly values the sacrifices rendered by our officers and men in fight against terrorism.”

Assuring his fullest support, the PM said that the entire nation is standing behind its armed forces in this war.