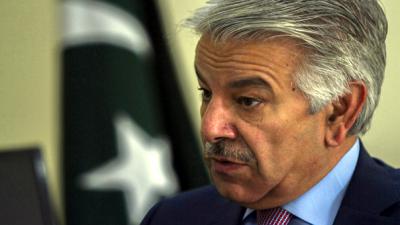 ISLAMABAD: Federal Minister for Defence, Khawaja Asif on Wednesday warned India against directing any aggression towards Pakistan, saying the nuclear power nation is fully capable of befittingly responding to any actions against it.

Speaking exclusively to Geo News, he said that recent statements issued by India Prime Minister Narendra Modi and other ministers were ‘poisoning’ the Indo-Pak bilateral ties.

The minister’s statement comes against the backdrop of Indian Minister Rajyavardhan Singh Rathore's statement, who hours after his country had carried out an operation against militants in Myanmar, said India will strike at a place and at a time of their choosing against all countries, including Pakistan, and groups harbouring “terror intent”.

Urging the international community to take notice of Indian aggression, the defence minister said that prevailing tense situation can prove a ‘harbinger of disaster’ in South Asia.

Khawaja Asif went on to say that Pakistan was still an aspirant of peace, adding that the country was currently engaged in a war of eradicating terrorism from its soil.

Will speak to Boris Johnson if need arises to have Nawaz deported: PM Imran Khan