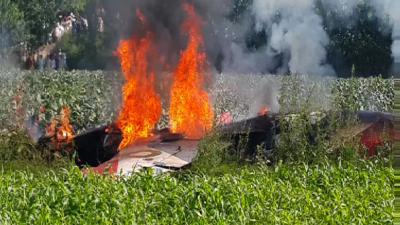 SWABI: A training aircraft of the Pakistan Air Force (PAF) was destroyed when it crashed in Khyber Pakhtunkhwa's Swabi district on Monday morning, with officials confirming both pilots remained safe.

The incident took place in Shah Mansoor area of district Swabi, about 100 kilometres northwest of Islamabad.

According to PAF officials, the K-8 trainer aircraft caught fire as it descended, but both pilots ejected safely before it crashed into an empty field.

Eyewitnesses said they saw the plane suddenly lurch in the air before it crashed to the ground in flames.

The pilots, who received minor injuries during their parachute landing, were taken to the hospital for treatment. No loss of civilian life or property was reported on the ground.

Law enforcement personnel cordoned off the area of the wreckage soon after the crash.