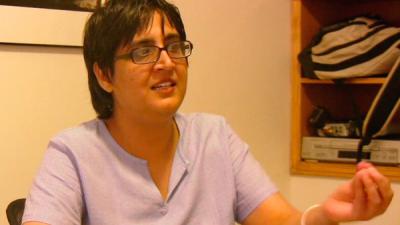 KARACHI: Sabeen Mahmud, director at The Second Floor (T2F) was gunned down by unidentified armed assailants on Friday night.

Sabeen Mahumd’s funeral will be held in T2F at 3:30PM while the funeral prayer will be held at Masjid-e-Mustafa in DHA Phase 1 at 5:15PM.

According to reports, Sabeen, accompanied by her mother was returning home after hosting a seminar at the T2F premises in Karachi’s Defence Housing Authority (DHA) Phase-II, late this evening, when unidentified gunmen on a motorbike opened fire at her car.

Both Sabeen and her mother were rushed to a nearby hospital where Sabeen succumbed to her wounds.

Her mother is severely injured and still under treatment.

Prime Minister Nawaz Sharif sent his condolences to the family of the deceased and has immediately summoned a report on the incident.

A spokesman of the CM said that the chief minister has also sought a probe report on the brutal murder.

#SabeenMahmud Such a shocking news that she has been shot dead RIP Aameen pic.twitter.com/Dz3WChlUYh

“I felt so hopeless about this country, and then when I started meeting people here we got strength from each other" Sabeen Mahmud.

Sabeen Mahmud was the Founder and Director of The Second Floor (T2F). She used to run the café and got additional revenue from tabla, guitar and other classes held at T2F. She worked nights to pay her bills as it was a struggle.

A social entrepreneur committed to the intersection of the liberal arts, technology, and activism, Sabeen created a hub for creative expression in Karachi. She had 20 years of experience in graphic design, new media, and technology, and was also a co-founder of a boutique interactive media and technology (BIT) consulting firm. She was also a blogger, civil liberties activist, and a founding member of the All Pakistan Music Conference, the Citizens’ Archive of Pakistan, Aman Ittehad, and former President of the Karachi Chapter of The Indus Entrepreneurs (TIE).

She was the Secretary of the Pakistan chapter of the South Asia Foundation and a member of Citizens for Democracy, a people’s movement that aims to mobilize public opinion against the dangerously rising tide of religious intolerance in Pakistan. Sabeen was also a Fellow of the Asia Society’s India-Pakistan Regional Young Leaders Initiative, a forum designed to broaden the dialogue on India-Pakistan relations through a focus on next generation leaders.

T2F (The Second Floor) is the first project of PeaceNiche. A community space for open dialogue, T2F provides citizens with a platform for social change through rich cultural activities, public discourse, and advocacy using progressive ideas and the new media. Other PeaceNiche initiatives include Faraar – A Playground for Creative Expression, Science Ka Adda, and the Urdu Poetry Preservation Project.

Since T2F's inception in 2007, it has hosted hundreds of events, ranging from poetry readings and film screenings, to vibrant debates on critical issues.

PeaceNiche, a not-for-profit NGO, registered under the Societies Act of 1860, promotes democratic discourse and conflict resolution through intellectual and cultural engagement. Committed to becoming a vibrant centre of Pakistan’s developing civil society, PeaceNiche works in the areas of Arts & Culture, Science & Technology, and Advocacy.

A uniform curriculum is an achievement for the govt, says PM Imran Khan