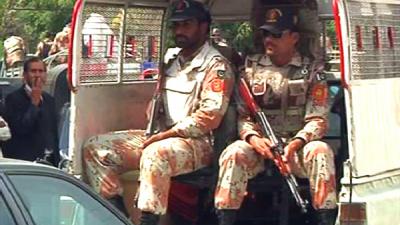 Siddiqui also revealed that he presided over rigging in the General Elections 2013 and added that a day before election day, the presiding officers were called to the sector and convinced regarding counterfeit votes.

According to the Rangers investigation team, the MQM worker came clean in ATC today and said that there are target killer camps located in the surrounding areas of Nine Zero with around 250 to 300 target killers. The MQM worker also admitted to being responsible for procuring weapons for the armed wing of the party.

Siddiqui also declared that to avoid further raids for arms on sectors, all the weapons were brought to Nine Zero.

Rangers officials said in court that Siddiqui was arrested from Nine Zero, while the lawyer representing him said a report was filed in February 2015 of Siddiqui going missing.

When asked by a judge about his detainment, Siddiqui replied that he was arrested a month ago and presented today for the first time.

The ATC has given the Rangers his custody for 90 days. The ATC allowed Siddiqui to meet this family as well as the lawyer.