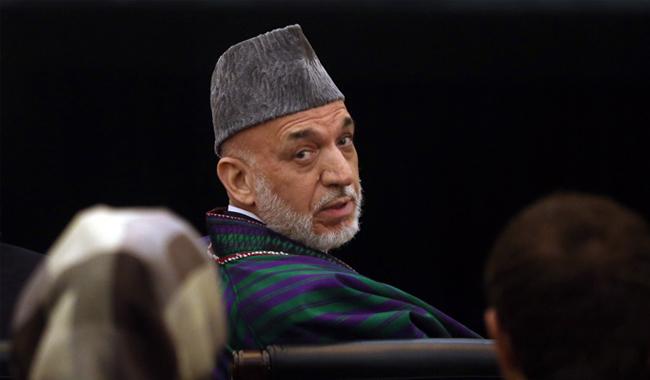 LONDON: Former Afghan president Hamid Karzai said that the US had been supplying weapons to Daesh in Afghanistan.

Karzai, in an interview with Russian Today (RT) here, said that the US army helicopters were being used to supply weapons to Daesh.

The former Afghan president said that militant group had emerged in Afghanistan over the past three to four years under the watch of US military and intelligence agencies.

He said that he has more than suspicions that US bases in Afghanistan are used to aid Daesh.

He claimed: “I get daily reports from the Afghan people that unmarked military helicopters supply Daesh in many parts of Afghanistan.”

The former president said that from 9/11 until today, there is more extremism in Afghanistan. He added that the Afghan people ask that if the US came to Afghanistan to defeat extremism, why do we have more of it today.

He said: “We don’t want our country to be bombed with huge, destructive weapons. We want peace.”

Karzai added that the use of MOAB (mother of all bombs) by the US forces was an indication to North Korea to show off US power, but it was an atrocity on the Afghan people.

On April 13 this year the US dropped one of its largest non-nuclear bombs on a tunnel complex reportedly used by Daesh in eastern Afghanistan. It was the first time such a weapon had been used in battle.

“Military action, especially by foreign forces, will not bring peace. Afghans need to evolve a consensus to reach out to everybody, including ‘sons of the soil’ Taliban, to seek a settlement,” he suggested.

The former president said the US needs to become a cooperative partner in the region, including with China, Russia, Pakistan and India, to bring peace.

With regards to Pakistan, Karzai said we have to live together with Pakistan. He said there are two strong contrasts in their relationship with Pakistan: “Pakistani people welcomed us when we became refugees. But they also did the horrible activity of supporting the Mujahideen [against Soviets] which weakened our society.”

Karzai said he hopes the new US policy for the region sees that Pakistan was used by the US against its neighbour for an inhumane purpose. He said they want to join hands with Pakistan to “salvage us from this deep conspiracy”.