Pakistan, S Arabia to enhance cooperation towards peace and security 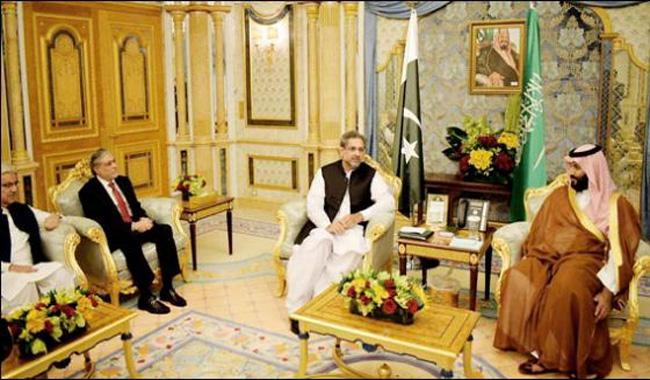 JEDDAH: Prime Minister Shahid Khaqan Abbasi on Wednesday called on Saudi Crown Prince Mohammad Bin Salman in Jeddah, where both the leaders reaffirmed strong bilateral ties between the two brotherly countries and pledged to enhance cooperation towards peace and security.

According to details, Shahid Khaqan Abbasi, accompanied by Finance Minister Muhammad Ishaq Dar and Foreign Minister Khwaja Muhammad Asif, in his first foreign visit as Prime minister met the Saudi Crown Prince and  signified the importance attached by Pakistan to its relationship with Saudi Arabia and discussed crucial  bilateral issues and Trump's recently announced strategy on Afghanistan in which he accused Pakistan for terror support.

While lauding astute leadership of the Crown Prince, in particular his Vision 2030 for Saudi Arabia's development, the Prime Minister reaffirmed Pakistan's continued and steadfast support for the Kingdom and its leadership.

The Prime Minister recounted the huge sacrifices and extraordinary efforts being made by the country as a nation to root out terrorism and bring peace and stability in the region.

Acknowledging the sentiments of the Government of Pakistan reflected in the Prime Minister's maiden foreign visit, the Crown Prince warmly welcomed him and his delegation,and aid that  Saudi Arabia acknowledges Pakistan's efforts and sacrifices in its resolute fight against terrorism.

During the meeting, Crown Prince hoped that ties between the two countries would further prosper in future and underscored the importance Saudi Arabia attaches to a strong and stable Pakistan, adding that Pakistan would overcome all the challenges and continue its journey towards progress and prosperity.

During the visit, the Prime Minister was also briefed about the arrangements for Pakistani pilgrims for this year's Haj.