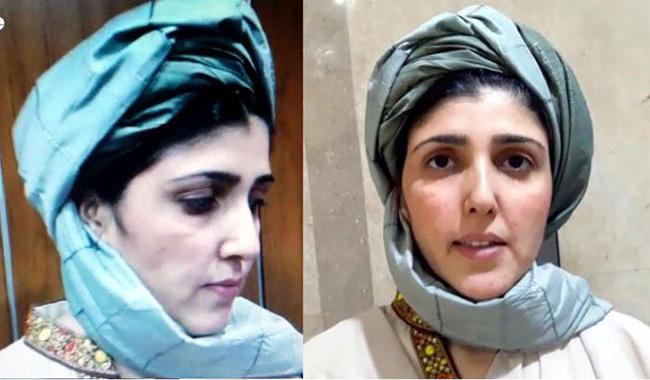 ISLAMABAD: Former Pakistan Tehreek-e-Insaf member Ayesha Gulalai, wearing traditional tribal turban, on Thursday made a stunning entry in National Assembly to affirm her stance against PTI chief Imran Khan that she is in right and would stay determined.

Talking to Geo News outside the Parliament House, Ayesha Gulalai said that a woman has to impersonate 'Razia Sultana' to fight against man for her rights. She alleged the PTI chairman of being jealous of the talented youth, adding that she is alone fighting against a 'Mafia'.

The lawmaker, who recently leveled serious allegations against PTI Chairman Imran Khan after a fiery departure from the party, entered into the National Assembly session on Thursday wearing a traditional tribal turban.

In an earlier session, Ayesha Gulalai had addressed the House and said she would not resign from her seat in the assembly. She continued her address amid ruckus created from the PTI benches.

Earlier this month, She alleged Imran for sending her 'inappropriate text messages'. To find out the truth the PM had formed NA committee.